Liverpool will be looking to continue their excellent form when they take on Burnley at Anfield tomorrow. Here is the side I think Brendan Rodgers will pick:

Liverpool will be looking to continue their excellent recent form when they take on Burnley at Anfield on Wednesday night. Here is the side I think Brendan Rodgers will pick:

Goalkeeper: Simon Mignolet has regained something like his best form again in recent weeks so he’s a cert to start in goal tomorrow.

Defence: Mamadou Sakho has returned to full training after missing the last two weeks with a thigh injury so the Frenchman is back in contention to start. Dejan Lovren got over his penalty miss in the Europa League last week with a decent display against Man City on Sunday but he’s still the man most likely to make way with Martin Skrtel and Emre Can expected to keep their places at the back.

Midfield: Steven Gerrard is close to making his return from his hamstring injury but this game is likely to come too soon and with Lucas Leiva still out, Jordan Henderson is expected to once again start alongside Joe Allen in midfield. Jordon Ibe has been ruled out for a month with a knee injury so Lazar Markovic should continue on the right wing with Alberto Moreno on the left.

Attack: Daniel Sturridge was among the subs against City last time out so I’d expect him to start up front with Raheem Sterling dropping back into a deeper role. Philippe Coutinho proved to be the match winner with a stunning goal against the Premier League champions so he’ll most likely get the nod over Adam Lallana in attack. 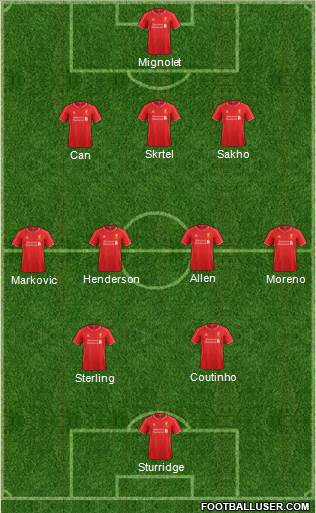