Chelsea will look to extend their lead at the top of the table when they take on West Ham on Wednesday night. Here is the side I think Jose Mourinho will pick

Chelsea will look to extend their lead at the top of the Premier League table when they take on West Ham on Wednesday night. Here is the side I think Jose Mourinho will select:

Defence:  The Blues boss has confirmed he’ll make changes to his team and that’s likely to see Filipe Luis come in for Cesar Azpilicueta at left-back. Kurt Zouma surprisingly started in midfield at the weekend but I think we’ll see him revert to the bench with John Terry and Gary Cahill continuing at the back. Branislav Ivanovic should keep his place on the right.

Midfield: Chelsea have no fresh injury worries to contend so John Obi Mikel remains their only absentee through injury with the Nigerian expected to miss the next month after knee surgery. Nemanja Matic will serve the final of his two-game suspension so Ramires is expected to start alongside Cesc Fabregas in the center of midfield.

Attack: New signing Juan Cuadrado could come in for Willian in attack while Oscar is also expected to get a recall having been named among the subs on Sunday. Eden hazard should continue to support Diego Costa up front. 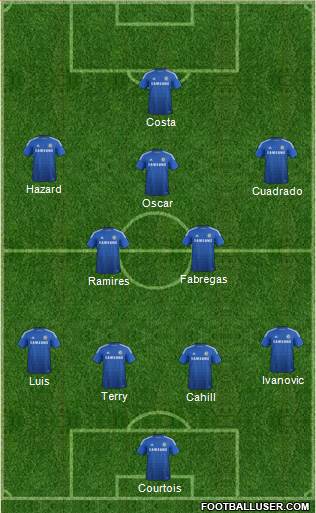