Chelsea will be looking to book their place in the quarter finals of the Champions League when they face PSG on Wednesday. Here’s our predicted line-up

Chelsea will be looking to book their place in the quarter finals of the Champions League when they face PSG on Wednesday evening. Here is the side I think Jose Mourinho will select:

Goalkeeper: Thibaut Courtois is expected to keep Petr Cech out of the side as Mourinho goes with his young No.1.

Defence: The Blues have no fresh injury worries to contend with at the back so John Terry, Cesar Azpiliceuta and Branislav Ivanovic are all expected to start. Kurt Zouma has been seeing plenty of first team football lately but I think Mourinho will go with the experience of Gary Cahill to deal with Zlatan Ibrahimovic tomorrow night.

Midfield: Nemanja Matic returns from a domestic suspension and he’s been passed fit after injuring his ankle during the celebrations following last weekend’s Capital One Cup victory over Tottenham. Ramires could start alongside the Serbian international to offer more protection in front of the back four meaning Cesc Fabregas could move into a more advanced role.

Attack: Eden Hazard is a cert to start in attack while I think we’ll see Willian picked ahead of Juan Cuadrado on the right wing. Diego Costa should start up front and he’ll be looking to score his first European goal this season. 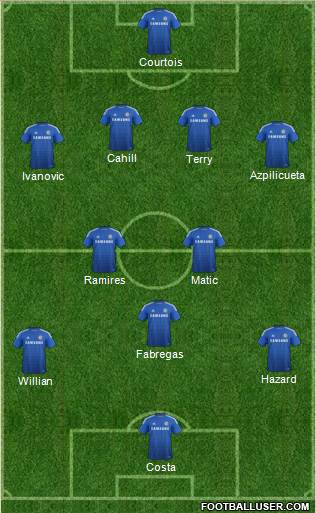