Chelsea will look to tighten their grip at the top of the table when they face Man Utd on Saturday. Here is the side I think Jose Mourinho will select:

Chelsea will look to take a huge step towards reclaiming the Premier League title when they face Manchester United at Stamford Bridge on Saturday evening. Here is the side I think Jose Mourinho will select:

Defence: The Blues have no fresh injury worries in defence so Mourinho should to stick with his first choice back four. That will see Cesar Azpilicueta retain his place ahead of Filipe Luis at left-back while Gary Cahill should once again partner skipper John Terry in the middle of defence. Branislav Ivanovic will complete the back four with the Serbian international starting at right-back.

Midfield: Mourinho is likely to play another defensive-minded midfielder alongside Nemanja Matic to protect the back four with Cesc Fabregas deployed in a more advanced role. Ramires was poor against QPR last weekend so we could see John Obi Mikel make his long-awaited comeback after several weeks out through injury.

Attack: If Fabregas does play further forward then Oscar is likely to drop out with Eden Hazard and Willian expected to keep their places in attack. Diego Costa has been ruled out for the rest of the month so Loic Remy is likely to start up front after recovering from a knock that kept him out of the QPR game. Didier Drogba will drop back to the bench to make way. 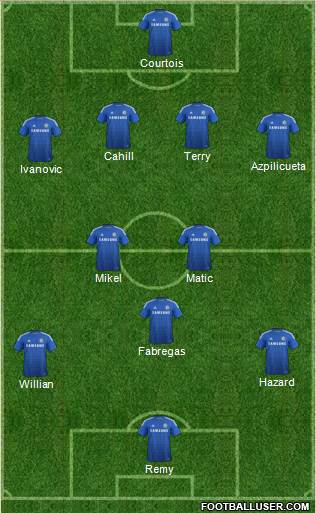