Tottenham will look to extend their unbeaten run when they take on Chelsea on Sunday. Here is the side we think Mauricio Pochettino will select for the game:

Tottenham will look to extend their unbeaten run when they take on Chelsea at White Hart Lane on Sunday afternoon. Here is the side we think Mauricio Pochettino will select for the game:

Defence: Pochettino is expected to make two changes to his back four with Kyle Walker and Danny Rose both likely to get recalls to the starting eleven after being rested for last night’s Europa League win over Qarabag.

Jan Vertonghen and Toby Alderweireld will continue in the middle of defence but Kieran Trippier and Ben Davies are likely to drop to the bench.

Midfield: Mousa Dembele was also given a breather on Thursday night so he too is expected to come back in with Ryan Mason the man most likely to make way. Eric Dier should continue to marshall the midfield with Deli Alli playing just in front in a more advanced role. Nabil Bentaleb is likely to once again be ruled out through injury.

Attack: Harry Kane was the match-winner last night and he should continue to lead the line up front against Chelsea on Sunday. Christian Eriksen is a cert to keep his place while Son Heung-Min should continue in attack with Erik Lamela struggling with a groin injury while Nacer Chadli is also on the sidelines. 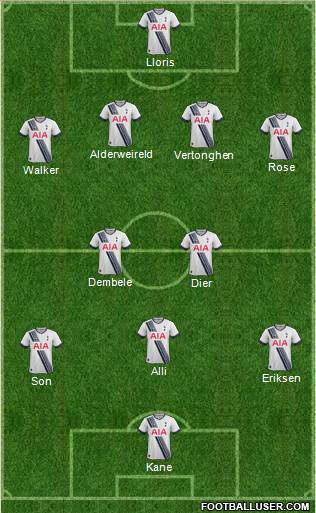