Arsenal face Olympiakos knowing anything other than victory will see them crash out of the Champions League. Here is the side we think Arsene Wenger will select

Arsenal face Olympiakos tomorrow night knowing anything other than victory will see them crash out of the Champions League. Here is the side we think Arsene Wenger will select for the game:

Defence: We have no fresh injury concerns for the game after Laurent Koscielny came through the match against Sunderland unscathed after being a slight doubt with a hip problem so I expect the boss will stick with his preferred back four.

That means Koscielny will once again start alongside Per Mertesacker in the heart of defence while Hector Bellerin and Nacho Monreal should retain their places in the full-back positions.

Midfield: Santi Cazorla has joined Francis Coquelin, Jack Wilshere and Mikel Arteta on the sidelines so we have limited options to mix things up in midfield.

Gooners have been panicking on Twitter after Aaron Ramsey wasn’t spotted at training this morning but he was on board the plane that flew out to Athens at lunchtime and it’s thought he was simply given a rest from training after only recently returning from injury.

Therefore, the Welshman should start in midfield alongside Mathieu Flamini tomorrow night.

Attack:  Alexis Sanchez is out for around three weeks with a hamstring injury that he suffered during the 1-1 draw at Carrow Road so Alex Oxlade-Chamberlain should keep his place in attack while Joel Campbell is likely to start on the right against his former club.

Mesut Ozil was also not in training this morning but like Ramsey he was just rested so he’ll start in the No.10 role while Theo Walcott could start up front after making his return from the bench on Saturday. Olivier Giroud has looked jaded in recent games so I think he’ll be given a breather. 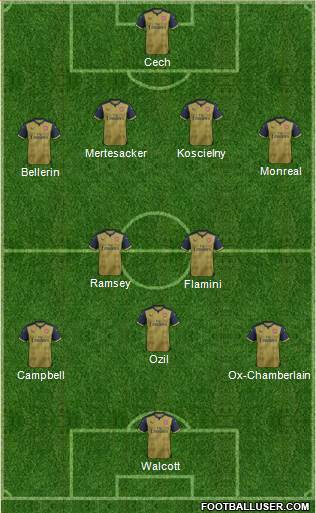