Liverpool will look to close in on the top four when they take on Sunderland at the Stadium of Light. Here is the side I think the Jurgen Klopp will pick.

Liverpool will look to close in on the top four when they take on Sunderland at the Stadium of Light on Wednesday night. Here is the side I think the Jurgen Klopp will pick.

Goalkeeper: Simon Mignolet made a successful return to the first team against Leicester last time out after recovering from a minor hamstring injury so he should continue between the sticks.

Defence: With Martin Skrtel out for around a month with a hamstring problem Dejan Lovren is set to continue alongside Mamadou Sakho at the back tomorrow evening. Alberto Moreno and Nathaniel Clyne should keep their places in the full back slots.

Midfield: James Milner isn’t expected to return from his calf injury until next week so he remains unavailable for selection. Lucas Leiva could be set for a recall after being left out of the starting eleven against Leicester with Roberto Firmino the man who could make way. Jordan Henderson and Emre Can should retain their places in the middle of the park.

Attack: Daniel Sturridge says he’s recovered from a hamstring injury but Klopp says the club are going to be cautious with him so I don’t think we’ll see the striker feature tomorrow Divock Origi was forced off at the weekend with a muscular injury so Christian Benteke could get a recall after scoring the winner from the bench last time out.

Jordon Ibe is expected back in the squad after recovering from illness but Philippe Coutinho is set to continue in attack along with Adam Lallana. 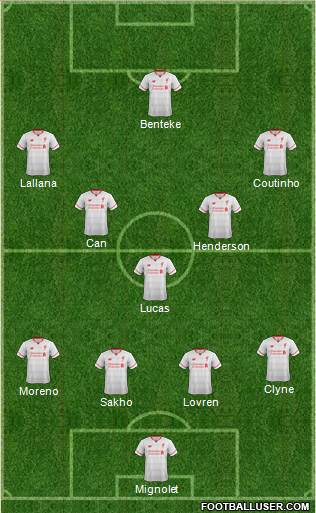