Tottenham take on Leicester City at White Hart Lane Wednesday night. Here is team news and the side we think Mauricio Pochettino will select for the game:

Tottenham will look to cement their place in the top four when they take on Leicester City at White Hart Lane Wednesday night. Here is team news and the side we think Mauricio Pochettino will select for the game:

Goalkeeper: Hugo Lloris is expected to be recalled to the starting eleven after being rested for the FA Cup draw with Leicester on Sunday. Therefore, Michel Vorm will drop back to the bench.

Defence: Pochettino is set to make several changes to the back four that started at the weekend with Jan Vertonghen, Ben Davies and Kyle Walker all set to come back in with Kieran Trippier, Kevin Wimmer and Danny Rose making way. Toby Alderweireld is the only player expected to keep his place in the defence.

Midfield: Ryan Mason remains unavailable but Pochettino has also confirmed to TottenhamHotspur.com that Mousa Dembele is back in the squad after recovering from injury and the Belgian international could come back in to the starting eleven. Tom Carroll should drop to the bench with Eric Dier keeping his place in the middle of the park if Dembele does start.

Attack: There will also be changes in attack with Deli Alli, Erik Lamela and Harry Kane set to be recalled after being rested last time out. Nacer Chadli and Hueng-min Son will return to the bench but Christian Eriksen should keep his place in the eleven. 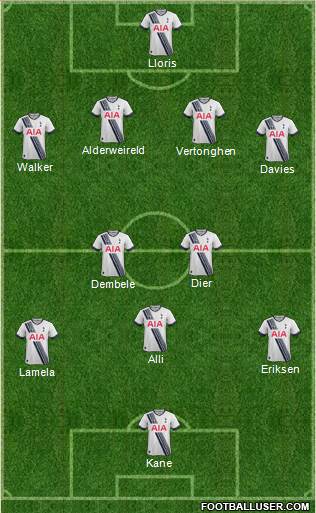