Arsenal will look to book their place in the fifth round of the FA Cup when they take on Burnley at the Emirates on Saturday afternoon.

Our Premier League title charge was dented with a disappointing defeat to Chelsea last Sunday which has left us sitting third in the table and three points adrift of leaders Leicester City.

However, we’ll have to switch our focus to FA Cup matters this weekend and Arsene Wenger will be demanding a response from his players as we look to extend our unbeaten run in the competition to 14 matches having not lost an FA Cup tie since 2013.

We began the latest defence of the cup with a comfortable victory over Sunderland three weeks ago and we’ll no doubt be hoping for a similar result this weekend, but we shouldn’t take Burnley too lightly as the Championship outfit can be a dangerous side on their day.

Francis Coquelin has been declared fit and available for selection after recovering from a knee injury that’s kept him on the sidelines for over nine weeks.

Mohamed Elneny could make his debut in midfield while Tomas Rosicky is also in contention after overcoming a knee injury that’s kept him out for the entire season so far.

Wenger is expected to rest some of his key men with the likes of Petr Cech, Laurent Koscielny, Nacho Monreal, Aaron Ramsey and Mesut Ozil among those who could be given a breather.

Danny Welbeck is back in full training but this game comes too soon as he still lacks match fitness so he remains unavailable along with Jack Wilshere and Santi Cazorla.

Wenger has confirmed David Ospina will start in goal while Gabriel is set to deputise for Per Mertesacker with the German suspended following his sending off last week.

As for Burnely, midfielder Dean Marney is back in contention after making his first appearance of the year as a substitute last weekend while Paul Robinson will be in the squad after completing his move last week. 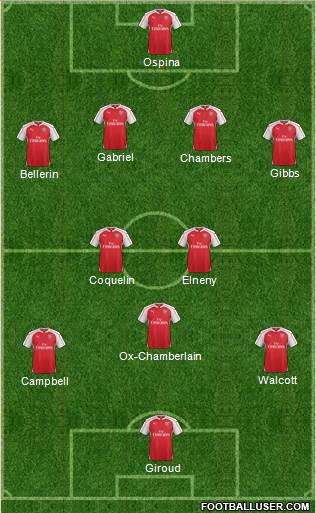 Arsenal 2-0 Burnley: The defeat last week will have hurt the players so hopefully they’ll use it as motivation to get back on track tomorrow. Burnley are on a decent run having not lost in six but even with a much-changed line-up, we should have too much for the Championship hopefuls.

The Gunners are the 4/11 favourites to win the game but Football-Talk can get you enhanced odds of 4/1 on a home win – just click here to take advantage of these crazy odds. My prediction of 2-0 is on offer at 6/1 while I also like the look of Olivier Giroud to open the scoring at 14/5. If you combined those two bets in a score-cast then we get very tempting odds of 12/1.