Chelsea take on Newcastle United at Stamford Bridge on Saturday afternoon. Here is the side we think boss Guus Hiddink will select for the game:

Chelsea will look to continue their unbeaten record when they take on Newcastle United at Stamford Bridge on Saturday afternoon. Here is the side we think Guus Hiddink will select for the game:

Defence: Hiddink is going to be forced in to making at least one change to his back four after Kurt Zouma was ruled out for six months with a serious knee injury that he sustained against Manchester United last Sunday.

Gary Cahill will come back in to the side to start with John Terry at the heart of defence with Cesar Azpilicueta and Branislav Ivanovic keeping their places in the full-back spots.

Midfield: John Obi Mikel has cemented himself as a first team regular under Hiddink so I expect he’ll continue in the holding role while we may see Cesc Fabregas drop back in to a deeper midfield position with Nemanja Matic missing out.

Attack: This would allow for the return of Eden Hazard to the starting line-up after he was left on the bench against United last week. Oscar and Willian should keep their places in attack and support Diego Costa, who should once again start up front.

Alexandre Pato could make his first appearance in the squad after working on his fitness following his loan move from Corinthians last month but the Brazilian will only be on the bench at best this weekend. 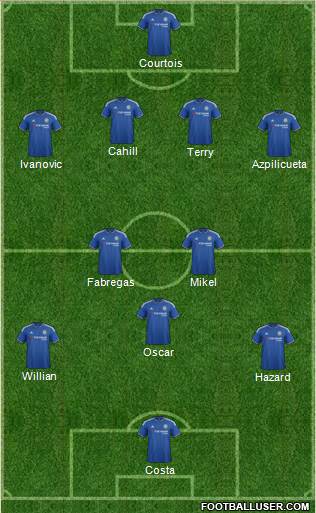