Arsenal striker Olivier Giroud made the cut but Chelsea and Liverpool dominate this weeks WhoScored Premier League Team of the Week….

Arsenal, Chelsea and Liverpool players have all made the cut in this weeks WhoScored Premier League Team of the Week….

Arsenal striker Olivier Giroud made the cut but Chelsea and Liverpool dominate this weeks WhoScored Premier League Team of the Week.

Chelsea continued their resurgence under Guus Hiddink with a resounding 5-1 victory over Newcastle United on Saturday with Pedro Rodriguez chipping in with two goals during the rout at Stamford Bridge to earn his place in the Team of the Week alongside team-mate Cesar Azpilicueta.

Willian also bagged a goal and an assist to help earn him a WhoScored rating of 9.26 – which not only saw him named in the TOTW but the Brazilian was also the highest individual scorer of the weekend.

Liverpool were also in excellent form as they thrashed Aston Villa 6-0 on Sunday with goalscorers Nathaniel Clyne and James Milner both making the Team of the Week thanks to fine scores of 8.22 and 8.34.

Midfielder Emre Can is also included thanks to a goal-scoring display at Villa Park while Roberto Firmino made it four Liverpool players to make the cut with a score of 8.63, despite the Brazilian not getting on the score-sheet.

Olivier Giroud grabbed a vital assist as Arsenal boosted their title chances with a last gasp 2-1 victory over league leaders Leicester City on Sunday and the Frenchman’s score of 8.73 was enough to see him make the TOTW. 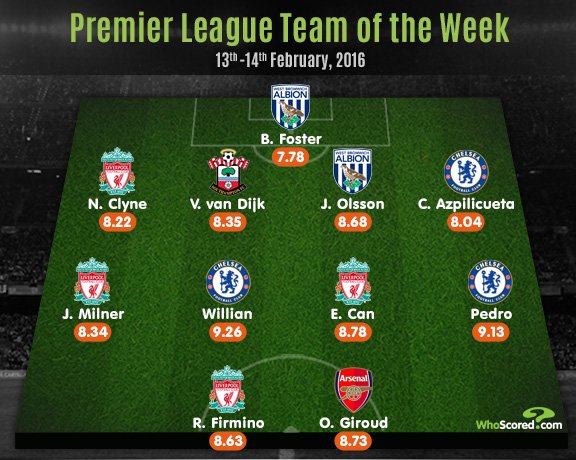