Man Utd will look to give their top four hopes a boost when they take on Watford at Old Trafford on Wednesday night. Here is the side I think van Gaal will pick

Manchester United will look to give their top four hopes a boost when they take on Watford at Old Trafford on Wednesday night. Here is the side I think van Gaal will pick:

Goalkeeper: David de Gea made a successful return from injury against Arsenal at the weekend and will keep his place in goal tomorrow.

Defence: van Gaal’s problems in defence have eased as Chris Smalling is expected to make his return after missing the last two games with a shoulder injury while Marcos Rojo is also set to be passed fit despite being forced off with a minor foot problem on Sunday.

Matteo Darmian could be back in the squad after overcoming a shoulder injury but the Italian may not be risked from the start just yet so Guillermo Varela should continue at right-back.

Midfield: Michael Carrick has played in defence in recent games but can move back in to midfielder if Smalling returns. Marouane Fellaini and Bastian Schweinsteiger remain out through injury so I’d expect Morgan Schneiderlin to retain his place in midfield.

Attack: Anthony Martial is also set to make his comeback from a hamstring injury but with Marcus Rashford scoring four goals in two games during his absence, the Frenchman may have to make do with a place on the left wing.

Juan Mata and Jesse Lingard could keep their places in attack but Wayne Rooney remains out with a knee injury. 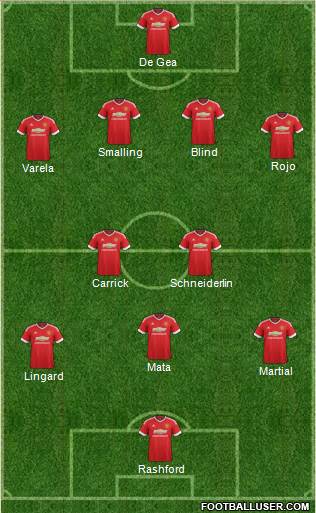