Borrusia Dortmund take on Liverpool in the first leg of their Europa League quarter final clash on Thursday. Here is the side I think Thomas Tuchel will pick.

Borrusia Dortmund will be looking to take control of the tie when they take on Liverpool in the first leg of their Europa League quarter final clash on Thursday evening. Here is the side I think Thomas Tuchel  will pick.

Goalkeeper: Number one goalkeeper Roman Weidenfeller will once again start between the sticks tomorrow night.

Defence: Tuchel has been handed a major double injury boost with Mats Hummels and Sokratis Papastathopoulos both set to be passed fit to return after missing Saturday’s win over Werder Breman.

Hummels had a minor calf problem while Sokratis was suffering from illness but both defenders are back in training and should line-up alongside Lukasz Piszczek and Marcel Schmelzer at the back.

Midfield: Dortmund have also been handed a boost in midfield with Ilkay Gundogan also returning to training after recovering from a foot injury that’s kept him on the sidelines in recent weeks. However, with the German international lacking in match fitness, I think we’ll see Julian Weigl continue alongside former Liverpool midfielder Nuri Sahin.

Attack: Hot-shot striker Pierre-Emerick Aubameyang is the dangerman that Liverpool will really have to keep a close eye on as he’s set to lead the line up front looking to add to his impressive haul of 36 goals in all competitions this season.

Marco Reus is also a key player for Dortmund while former Manchester United attacker Shinji Kagawa is likely to start in attack alongside the talented Henrikh Mkhitaryan. 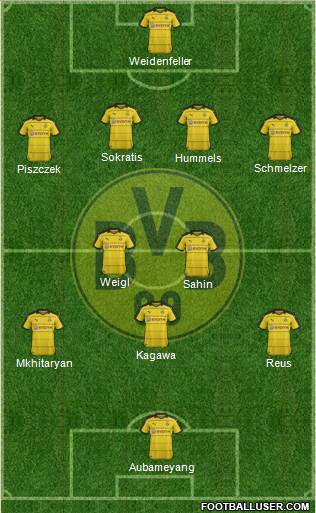