Chelsea take on relegation-threatened Sunderland at the Stadium of Light on Saturday afternoon. Here is the side we think Guus Hiddink will select for the game:

Chelsea take on relegation-threatened Sunderland at the Stadium of Light on Saturday afternoon. Here is the side we think Guus Hiddink will select for the game:

Goalkeeper: Thibaut Courtois should come back in to the side after serving his two-match ban meaning Asmir Begovic will drop to the bench.

Defence: John Terry came through Monday night’s dramatic draw with Tottenham after making his return from injury so I expect the skipper will continue at the back alongside Gary Cahill.

Branislav Ivanovic and Cesar Azpilicueta should also retain their places in the full-back spots meaning Hiddink will stick with the same back four that start last time out.

Midfield: Cesc Fabregas could drop back in to a deeper role this weekend having played further forward against Spurs. This would likely see Nemanja Matic miss out as John Obi Mikel has become a favourite under Hiddink during the second half of the season.

Attack: Eden Hazard came off the bench to score a stunning equaliser on Monday night so I expect the Belgian international to come back in to the starting eleven with Pedro dropping out after being taken off at half-time against Spurs.

Oscar could get a recall in attack while Willian is once again likely to support Diego Costa with the likes of Alexandre Pato and Radamel Falcao once again on the bench. 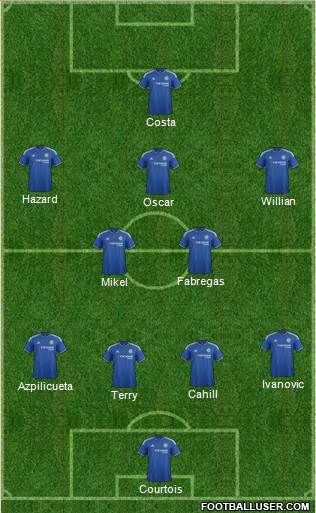