Is ‘snowing’ a help or a ‘hindrance’? 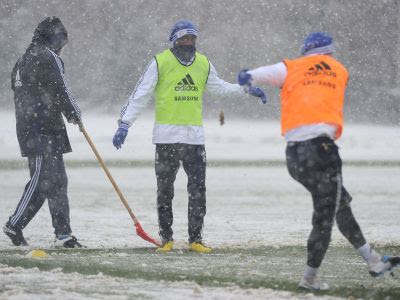 Yes! We all are disappointed about today’s ‘clash of the titans’ being postponed due to heavy snow, but we ought to analyze whether the ‘weather’ gave us a helping hand or pushed us down the ladder. I believe most of you though were confident on the outset but was shivering inside with a mixture of fear and hopelessness. It’s very natural though. When you see a team not win a single match in their last 5 games and the next game being against a top runner, the fear and anxiety is unavoidable!

So did the ‘snow’ assist us? Well to a certain extent I would agree. Manchester United now has a very strong squad and only missing Paul Scholes and Valencia – who is a long term absentee. I don’t personally consider Scholes as a ‘match decider’ thus there is no real advantage in playing United now. On the other hand, United has a super advantage because of Chelsea’s bad form. Hence, considering these facts I think the snow has helped us.

Do you remember Ferguson telling ‘this is the right time to play Chelsea’ – well that wasn’t a mere mind game. It carried some substantial fact in it and now of course he will be disappointed. For me, the games against United, Arsenal, Tottenham and City are the title deciders. We have already lost one, drawn one and won one out of possible eight, that is we have earned 4 points out of possible 9, and we have 15 points more available to be earned. If we win all of this next five games (of course we need to win the others too) we can ‘definitely’ win the league.

There is another reason for us to be content about the postponement. Had we played United and lost the game that would have been a huge, massive, exorbitant set back to the club. It does not only affect the players’ confidence and morale but also would put Ancelotti’s position in Roman’s jeopardy again. I feel this has given a small breathing space for Ancelotti and the team. Not many days we have to pull our socks up because next week, on the boxing day, we play Arsenal – So I hope the team approaches this chance in a positive manner, rebuild their confidence and bounce back against Arsenal! 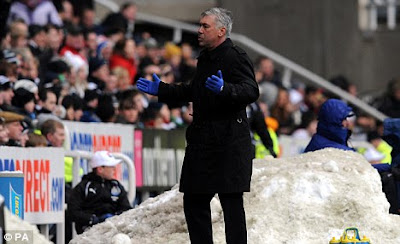 There is one thing I wanted to say to Ancelotti – ‘There is nothing wrong in playing ‘playstation football’. Let’s start playing that again’!