Chelsea take on Bristol Rovers in the EFL Cup this evening. Here’s a preview with team news, likely line-up and predicted score for the game

Chelsea will look to book their place in the third round of the EFL Cup when they take on Bristol Rovers at Stamford Bridge this evening.

Antonio Conte has enjoyed a successful start to his career in west London and followed-up an opening weekend win over West Ham with another late victory over Watford on Saturday afternoon.

Diego Costa scored the winning goals in both games but the Brazilian-born hitman is expected to be given a breather as Conte gives some of his key men a rest for the League Cup tonight.

After their mid-table finish in the Premier League last season, Chelsea have no European football to look forward to and will therefore play in the second round of the League Cup for the first time since 1996/97.

The Blues have won their last eight League Cup ties against lower-ranked opposition but Bristol won’t be coming to the capital just to make up the numbers and I’m sure the League One side will be hoping to pull off a shock tonight.

Conte has no fresh injury concerns to worry about but Willian could return to the squad after missing the win at Watford with a minor calf injury.

Kurt Zouma remains the only significant injury victim but his absence leaves Conte with just four senior defenders to choose from meaning he has little room to rotate his back four.

One change we could see is youngster Ola Aina coming in at right-back with Branislav Ivanovic rested. Cesc Fabregas should also have played his way in to the starting eleven after making a huge impact off the bench at the weekend.

Victor Moses may also get a run out with Eden Hazard rested, Asmir Begovic should get a chance to impress in goal while Michy Batshuayi could make his full debut up front if Conte rests Costa. 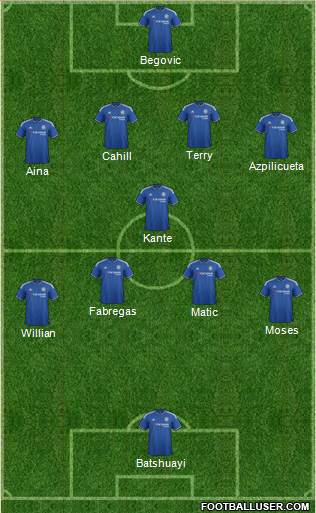 Chelsea 3-0 Bristol Rovers: Even after making six changes to his starting eleven, Conte is still able to field a top quality line-up and I think Chelsea will have way too much quality for Bristol at the Bridge.