Manchester United will now face stiff competition from Premier League rivals Arsenal for the signing of a £52m-rated attacker, according to reports

The summer transfer window is closed for another year but it’s now time to look back on those deals that didn’t go through and those that are being lined-up for the future. Today, Arsenal join the chase for Goncalo Guedes…. 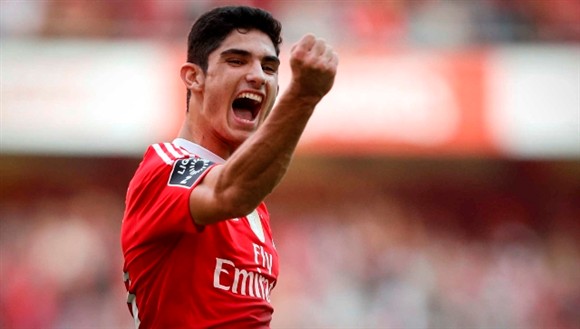 Manchester United will now face stiff competition from Premier League rivals Arsenal for the signing of Benfica’s £52m-rated attacker Goncalo Guedes, according to the Mirror.

United spent heavily in the summer market bringing in several established signings but it looks as though Jose Mourinho is also planning to secure the future of the club by targetting one of Portugal’s most talented youngsters.

Guedes has been with Benfica his entire career and has progressed through the youth ranks to become a first team regular over the past two years having earned a reputation in his homeland as the ‘new Cristiano Ronaldo’.

The 19-year-old’s potential caught the attention of United scouts with the Mirror reporting earlier this week that Mourinho was eyeing a move for the Portuguese winger after sending representatives to watch the player during Benfica’s recent win over Feirense.

However, it looks like any move from United could well be under threat from one of their fiercest rivals as the Mirror are reporting today that Arsenal are also in the race to sign the talented teenager.

Arsene Wenger is known for putting his faith in youth so it’s no surprise that the Gunners boss is also tracking Guedes meaning two of England’s biggest clubs could be set to battle-it-out over his signature this summer.

However, any potential deal isn’t going to be straightforward as the newspaper report claims that Guedes has a buyout clause worth a whopping £52m and Benfica are under no pressure to sell on the cheap as he still has five years left to run on his contract.

It’s highly unlikely that either Arsenal or United will be prepared to pay that kind of money for an unproven teenager, despite their vast wealth, so unless Benfica are willing to do business at a figure well below his buyout fee, I can’t see Guedes coming to England any time soon.