Manchester United take on Fenerbahce in Turkey tomorrow evening. Here is the team I think Jose Mourinho will pick for the game:

Manchester United will be looking to take a huge step towards the knock out stages of the Europa League when they take on Fenerbahce in Turkey tomorrow evening.

Goalkeeper: David de Gea is certain to keep his place between the sticks tomorrow night.

Defence: Mourinho has limited options to rotate at the back as Chris Smalling has once again been ruled out with a foot injury that’s kept him out of the last three games so he joins Eric Bailly on the sidelines.

Antonio Valencia is facing an extended spell on the treatment table after suffering a fractured arm so Matteo Darmian is set to start at right-back. Marcos Rojo started alongside Daley Blind during the 0-0 draw with Burnley on Saturday so they should retain their places with Luke Shaw on the left.

Phil Jones is back in the squad after recovering from a serious injury but he’s still lacking match fitness so I don’t think he’ll be risked from the start.

Midfield: Ander Herrera is facing a domestic ban against Swansea on Sunday so it would make sense for the Spaniard to face Fenerbahce so I expect he’ll once again line-up alongside Paul Pogba in the middle of the park.

Michael Carrick has been left back in Manchester with many assuming he’s being rested ahead of the weekend but there are unconfirmed rumours circulating that he’s picked up a knock.

Attack: Mourinho played a strong side against the Turks at Old Trafford two weeks ago but I can see him rotating in attack tomorrow with Wayne Rooney coming in to the side along with Anthony Martial – who’s recovered from a knock.

Zlatan Ibrahimovic is likely to get a rest meaning we should see Marcus Rashford through the middle while Henrikh Mkhitaryan could be in line to make his first start for over two months after being included in the travelling party.

Juan Mata, Jesse Lingard and Ashley Young are other options in attack if Mourinho doesn’t feel Mkhitaryan is ready to start just yet. 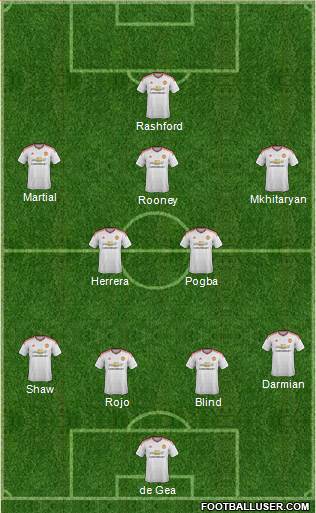