Tottenham will be looking to bounce back from their Champions League exit when they take on Chelsea this weekend. Here is our predicted line-up.

Tottenham Hotspur will be looking to bounce back from their disappointing Champions League exit when they take on Chelsea at Stamford Bridge on Saturday evening.

Goalkeeper: Hugo Lloris proved once again that he’s one of the best goalkeepers in the world with another excellent display against Monaco on Tuesday night so he’s certain to keep his place this weekend.

Defence: Pochettino has been tinkering with a back three lately but with Danny Rose suspended following his fifth booking of the season last week and Ben Davies still struggling with an ankle injury, the Spurs boss has limited options on the left-side.

Kyle Walker is expected to come back in at right-back after being rested on Tuesday which could see Kieran Trippier move across to the left. However, I think that Pochettino will opt to start Jan Vertonghen at left-back where he’s played many times for club and country.

Toby Alderweireld  has once again been ruled out with a knee injury so Kevin Wimmer is expected to partner Eric Dier in the middle of defence.

Midfield: Harry Winks has started the last two matches but I think we might see the youngster dropping back to the bench for the trip to Chelsea with Dele Alli and Mousa Dembele lining-up in midfield. Victor Wanyama should once again occupy the holding role in front of the defence.

Attack: Christian Eriksen was left out against Monaco but I expect the Danish international to return in attack with Heung-min Son likely to keep his place as Erik Lamela is set to miss out with an on-going hip problem.

Harry Kane was on the score-sheet again from the penalty spot in midweek making it four goals in three games since his return from injury and Pochettino will be hoping his striker continues that form at the Bridge on Saturday. 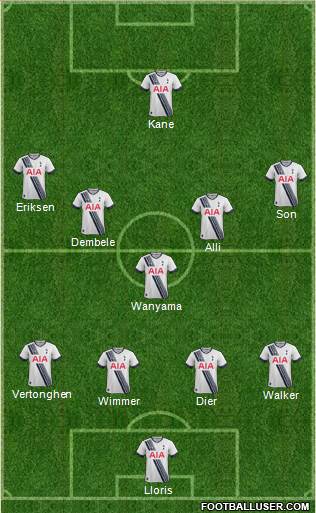