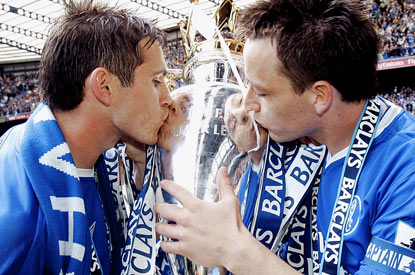 Chelsea Duo of JT and Lampard set to start the game together for the first time in over three months. Frank Lampard is about to make his first start at tonight’s game against Arsenal at Emirates Stadium. I actually am very happy to welcome back Frank on the pitch. The midfield has been at different level in his absence. King Carlo Ancelotti said in press conference:

“It will be important to have his support in our attacking play, and when we have the ball. That will increase our possibility to score. It’s very difficult to find this kind of player who has the capability of scoring 20 goals from midfield.

He has character, ability, he always runs and works hard, not speaking. He’s so professional. It’s the best image for a player. I don’t like players who speak but don’t run. I like players who don’t speak but run. They do their talking on the pitch.

Having him back will be fantastic news for the next game. He will be able to play. He’s fit. He’s excited. For us, he’ll be very important. I don’t expect anything extraordinary from him. Just what he’s able to do. He has a special ability and he’s always retained that.

He doesn’t miss that now. His problem is resolved and he won’t have any more trouble with it. In fact, of all our players, he is the one in the best condition at this moment.”

We have been in a bad form lately. Standing 4th in the table, one point adrift Arsenal, and one point above Tottenham Hotspur. Critical position to be honest. And where are United and City? Sitting happily on the 1st and 2nd. This is not good considering our performance in recent seasons. But the match against Spurs fortnight ago showed the different character of the team. In that match we saw the team play like it was the team which won THE DOUBLE last season.

JT is already back, and now, Lampard is also returning. I hope this is our moment. With Lampard’s return, I hope we will be more powerful in the middle field, I hope we will attack more, I hope it’s going to give Chelsea a boost to win the game. Getting stumbled approaching the second half of the competition is certainly not something that we expect. The competition is getting tighter, we need to keep our head in the game, we need to start winning again. and I sincerely hope that the match against Arsenal will be the game which we need to get things back on the tracks and we will get the momentum of it to drive us for another memorable season at the Stamford Bridge.