Chelsea will be looking to get their Premier League title challenge back on track following their defeat to Spurs when they take on Leicester City at the King Power on Saturday afternoon.

Goalkeeper: Conte is set to recall his big guns after resting a number of his key men for last weekend’s FA Cup win over Peterborough so we should see Thibaut Courtois recalled in goal with Asmir Begovic making way.

Defence: John Terry isn’t available due to suspension following his sending off last time out but the Blues skipper would probably have been named on the bench anyway as Conte is expected to revert to his preferred back three this weekend.

That means David Luiz and Cesar Azpilicueta should come back in to the starting eleven after being rested last weekend while Gary Cahill should keep his place in defence – although Kurt Zouma is pushing for a start after making his long-awaited comeback from injury against Peterborough.

Midfield: There should be plenty of changes in midfield with N’Golo Kante and Nemanja Matic both expected to come back in to the side after being rested last weekend which would mean Cesc Fabregas missing out.

Victor Moses and Marcus Alonso should also get recalls in the wing-back positions after being given a breather in the FA Cup match.

Attack: Conte will almost certainly recall top scorer Diego Costa after resting him last week with Michy Batshuayi dropping back to the bench despite getting on the score-sheet against Peterborough.

Eden Hazard will also get a recall in attack after being given a well-earned breather while Pedro could keep his place ahead of Willian after scoring a brace last weekend. 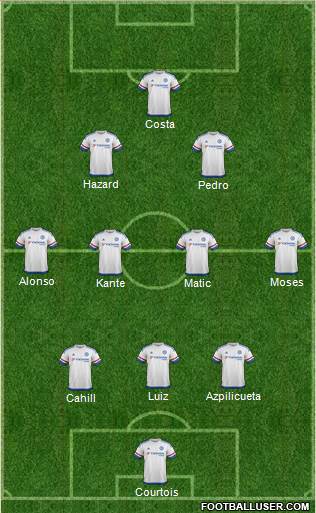