The draw for the quarter finals of the FA Cup has been conducted with Chelsea facing Man Utd while Arsenal and Tottenham got home draws.

The draw for the quarter finals of the FA Cup has been conducted this evening and as usual it’s thrown up some intriguing ties as clubs start to smell Wembley.

Chelsea eased in to the last eight after beating Wolverhampton Wanderers 2-0 on Saturday evening thanks to goals from Pedro and Diego Costa and Antonio Conte’s men will now face Manchester United at Stamford Bridge in the next round.

United booked their place in the last 8 after coming from behind to beat Blackburn Rovers 2-1 at Ewood Park this afternoon and Jose Mourinho now faces a trip to his former club in the next round.

Arsenal have been handed another dream draw as they’ll host Lincoln City at the Emirates if they get past fellow Conference side Sutton United tomorrow night. There will be some short odds for Arsene Wenger’s men NOT to make the semi finals.

Tottenham booked their place in the draw after Harry Kane bagged a hat-trick to secure a 3-0 victory at Fulham this afternoon and the north Londoners will now host Millwall in the quarter finals.

Manchester City will face a trip to the Riverside to play Middlesbrough if they manage to beat Huddersfield Town in their fifth round replay at the Etihad.

So it looks like we’re on course to have a blockbuster semi final line-up with Arsenal, Spurs, City and either Chelsea or United favourites to reach the last four. 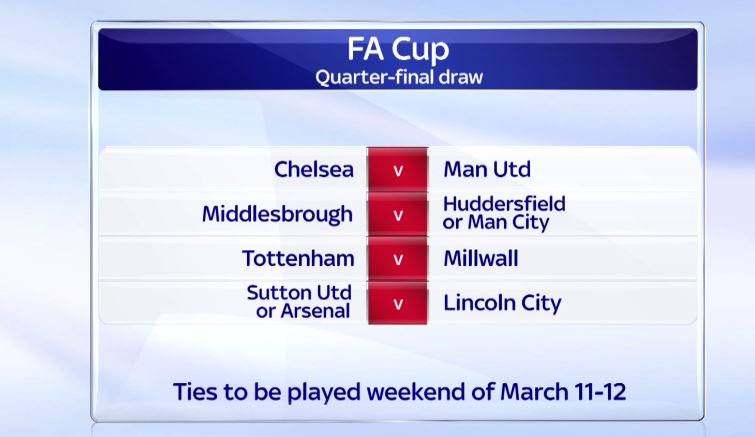