Chelsea entertain Swansea at Stamford Bridge on Saturday afternoon. Here is the team we think Antonio Conte will pick for the game:

Chelsea will look to tighten their grip at the top of the Premier League table when they entertain Swansea at Stamford Bridge on Saturday afternoon.

Goalkeeper: The Blues boss is expected to make plenty of changes to his starting eleven after resting some of his key for last weekend’s FA Cup win at Wolves. Thibaut Courtois has been suffering from gastroenteritis but the Belgian international is expected to recover to replace Asmir Begovic between the sticks.

Defence: David Luiz was given the weekend off last time out in order to rest his niggling knee injury but the Brazilian international has been managing the pain for several months so he’s expected to come back in to the side on Saturday.

Midfield: Conte is certain to bring N’Golo Kante back in to the starting eleven after he was given a well-earned breather last time out while Nemanja Matic is also in-line for a recall after not even being named in the squad against Wolves.

Therefore, Nathan Chalobah and Cesc Fabregas will make way but Victor Moses should keep his place on the right while Marcos Alonso is expected to come back in on the left side of midfield.

Attack: Eden Hazard and Diego Costa both started against Wolves and they are likely to keep their places in attack this weekend while Pedro could move back in to a more advanced role after playing out on the wing last time out.

Willian is the man most likely to make way so the Brazilian attacker will join the likes of Michy Batshuayi and Fabregas on the bench. 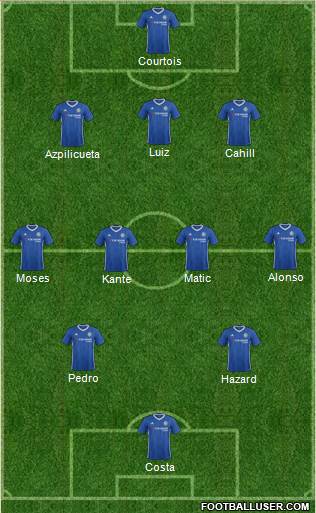 Chelsea are the heavy favourites to win the game but its always difficult to predict results in the Premier League and that’s where Odinbet comes in….

Odinbet is FREE to use, and statistical analysis for games played in world football’s top 12 leagues. Use the filter system to refine which games you should bet on and view the analysis that mathematical system produces to give you the best chance of making money from the Chelsea vs Swansea game.