Confirmed: 5 Players Left Behind As Arsenal Squad Flies Off On Pre-Season Tour 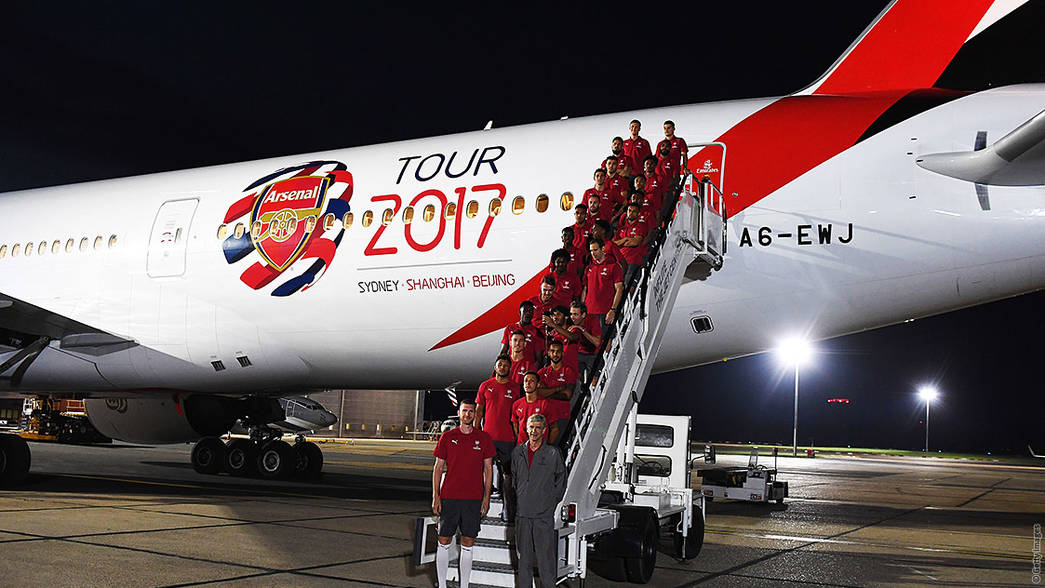 Arsene Wenger has named a 25-man squad as Arsenal flew-out to Australia to start our pre-season tour but there are a number of players who have been left behind.

The squad jetted out of London late last night and will arrive in Sydney early Tuesday morning [local time] where Wenger is scheduled to hold a press conference to discuss his travelling squad in more detail.

As expected, goalkeepers Petr Cech and Emi Martinez were on the plane while David Ospina was also among the travelling party despite being linked with a move away from the club this summer.

However, Wojciech Szczesny has been left back in north London to resolve his future amid speculation that the Polish international is close to securing a move to Juventus.

Club record signing Alexandre Lacazette makes the trip and he’ll be hoping to get to know his new team mates better during the two-week tour and the same can be said of Sead Kolasinac after he made a free transfer move from Schalke.

Olivier Giroud was named in the 25-man squad despite question marks over his future following Lacazette’s arrival while Mesut Ozil and Alex Oxlade-Chamberlain have also travelled to Australia as talks continue with their representatives over new contract extensions.

Regulars such as Laurent Koscielny, Nacho Monreal, Aaron Ramsey, Theo Walcott, Danny Welbeck, Granit Xhaka and Francis Coquelin also make the squad along with Per Mertesacker – who’s about to enter his final season before taking over the academy.

There are several youngsters on the plane who’ll be looking to impress the boss during the tour with Krystian Bielik, Cohen Bramall, Ainsley Maitland-Niles, Donyell Malen, Reiss Nelson, Eddie Nketiah and Joe Willock all given their opportunity.

However, Alexis Sanchez doesn’t make the trip as he’s still on holiday following his excursions with the Chile squad at the Confederations Cup and supporters are still sweating over his future amid reports he’s looking to leave.

Kieran Gibbs, Mathieu Debuchy, Carl Jenkinson and Lucas Perez have also been left behind suggesting their futures lie away from Arsenal while Shkodran Mustafi, Rob Holding, Hector Bellerin and Calum Chambers have also been omitted as they remain on holiday following their stints on international duty this summer.

Jack Wilshere and Santi Cazorla are the other significant absentees as they continue to recover from serious injuries.

Here is the 25-man squad as confirmed on Arsenal.com:

The squad will play two friendlies in Sydney against Sydney FC [Thursday 13th] and Western Sydney Wanderers [Saturday 15th] before heading to China to play Bayern Munich in Shanghai on July 19th.

We then fly to Beijing to take on Premier League champions Chelsea in the Bird’s Nest Stadium on Saturday, July 22.