Tottenham start the new season with a tricky trip to St James’ Park to take on Newcastle on Sunday. Here is the side we think Mauricio Pochettino will select:

Goalkeeper: Hugo Lloris will once again lead Spurs in to the new campaign as Pochettino’s first choice goalkeeper and French international is expected to be a key figure for the north Londoners this year.

Defence: Spurs have problems at right-back as they are yet to bring in a replacement for Kyle Walker following his move to Manchester City earlier in the summer.

They received positive news on Kieran Trippier as his ankle injury isn’t serious but it will be enough to keep him out of the trip to the north east this weekend so Pochettino has a decision to make.

The simplest solution is to move Eric Dier out to right-back with Belgian international’s Tony Alderwiereld and Jan Vertonghen certain to start in the middle of defence.

Danny Rose has cast doubt over his future after conducting a controversial newspaper interview this week but the defender isn’t available for selection anyway as he works his way back to full fitness from a knee injury so Ben Davies will start on the left.

Midfield:  Victor Wanyama has recovered from a knee injury but the midfielder is lacking match practice so Harry Winks may start in the middle of the park alongside Mousa Dembele.

Attack: Heung-min Son has also been declared fit but again the South Korean international has barely played in pre-season so won’t be in a condition to line-up from the start.

With Erik Lamela still working his way back to full fitness following a long-term hip problem we could see Moussa Sissoko make a rare start against his former club this weekend.

Otherwise it should be a familiar side with Christian Eriksen and Dele Alli looking to carry over their excellent form from last season as they support Golden Boot winner Harry Kane in attack. 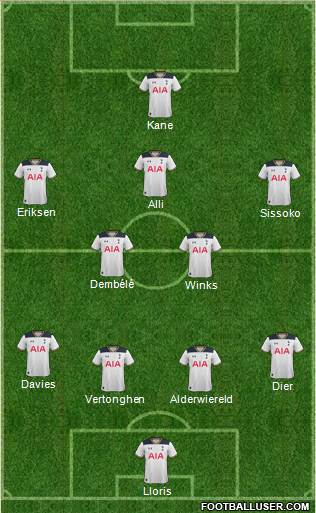