Manchester United take on Benfica at Old Trafford on Tuesday night. Here is the team I think Jose Mourinho will pick for the game:

Manchester United will be looking book their place in the knockout stages of the Champions League when they take on Benfica at Old Trafford on Tuesday night.

Goalkeeper: David De Gea has played in all the Champions League group games so far this season so I see no reason why Mourinho would change things tomorrow night.

Defence: The United boss, however, might mix things up at the back with Victor Lindelof expected to be given another chance to impress against is former side.

A switch of formation to a back four could see Chris Smalling and Phil Jones make way with Eric Bailly keeping his place as he looks to build on his fitness fitness having only recently returned from injury.

Mourinho might resist the temptation to rest Antonio Valencia so he could once again start on the right but we could see Matteo Darmian come in on the left side of defence.

Midfield: With Paul Pogba and Marouane Fellaini still out injured and Michael Carrick also still on the sidelines through illness it leaves Mourinho with limited options in the middle of the park.

Youngster Scott McTominay is an option but I think we’ll see Daley Blind start in a central role alongside Nemanja Matic with Ander Herrera given a breather ahead of the Chelsea game this weekend.

Attack: Anthony Martial is pushing for a recall after coming off the bench to score the winner during the 1-0 victory over Tottenham on Saturday afternoon.

Marcus Rashford is the man who’s most likely to make way as Henrikh Mkhitaryan should keep his place in attack while Juan Mata could be given a recall after being left on the bench at the weekend.

Romelu Lukaku is almost certain to keep his place up front and he’ll be looking to get back among the goals after drawing a blank against Tottenham.

Jesse Lingard impressed during the League Cup win over Swansea last week so he could be in Mourinho’s thoughts but I think he may have to make-do with a place on the bench tomorrow night. 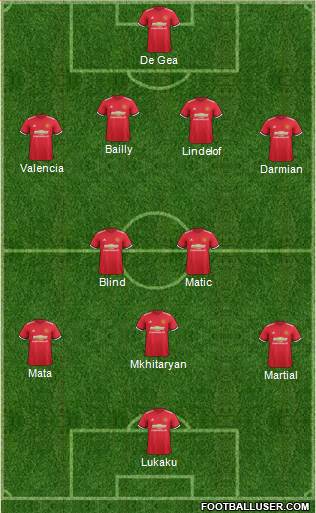