Arsenal take on BATE at the Emirates this evening. Here is the side Gooner Mac thinks Arsene Wenger will select for the game:

Arsenal will look to end their Europa League group stage campaign on a high when we take on BATE at the Emirates this evening. Here is the side Gooner Mac thinks Arsene Wenger will select for the game:

Goalkeeper: David Ospina is set to return in goal with Petr Cech expected be rested while Matt Macey should be named on the bench.

Defence: The boss is set to once again rest his big-guns in the Europa League meaning first team regulars Laurent Koscielny and Nacho Monreal won’t be involved.

Shkodran Mustafi picked up a thigh injury during the defeat to Manchester United last weekend so he’s been ruled out but the German would have been rested even if fit.

Per Mertesacker is set to captain the side in the middle of defence while Rob Holding also expected to be given another run-out. Wenger went with Mathieu Debuchy on the right side against Cologne last month but he may deploy Calum Chambers at the back after his stint on the wing.

Francis Coquelin is expected to start and Mohamed Elneny may get the nod ahead of young Joe Willock as Wenger says he wants to give minutes to his experienced fringe players tonight.

Ainsley Maitland-Niles should once again start on the left while Reiss Nelson could return on the right after only being fit enough for a place on the bench at Cologne due to illness.

Attack: Olivier Giroud is set to lead the line up front and he’ll be looking to put in a top class performance after coming off the bench to score twice against Huddersfield recently.

Wenger has already confirmed that Jack Wilshere and Theo Walcott will both start as they desperately need to get some minutes under their belts so they could be deployed in attack behind Giroud.

Danny Welbeck and Alex Iwobi are available and it will be interesting to see if they’re named in the squad as they aren’t in Wenger’s first choice starting eleven at present.

Alexis Sanchez and Mesut Ozil are once again the preferred options behind Alexandre Lacazette so the trio should all be rested this evening ahead of the trip to St Mary’s on Sunday. 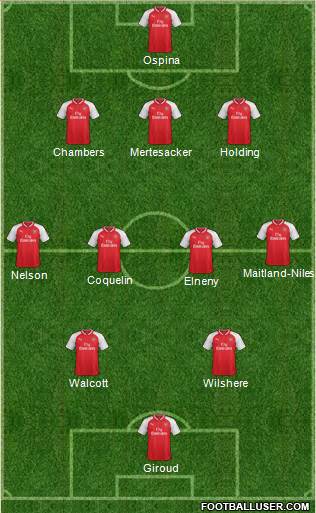