Chelsea take on Norwich City in their replay at Stamford Bridge tomorrow night. Here is the side we think Antonio Conte will pick for the game:

Chelsea will look to book their place in the fourth round of the FA Cup when they take on Norwich City in their replay at Stamford Bridge tomorrow night.

Goalkeeper: Conte has confirmed he’ll make changes so I expect we’ll see Willy Caballero get another chance in goal with Thibaut Courtois rested.

Defence: David Luiz should get a recall at the back with Andreas Christensen given a breather while Conte has suggested that youngster Ethan Ampadu will feature so he could replace Cesar Azpilicueta.

Gary Cahill has been ruled out with a muscular injury that he picked up during the draw with Leicester at the weekend so Antonio Rudiger could keep his place at the back.

Midfield: Davide Zappacosta is pushing for a recall so Victor Moses is likely to be rested while Brazilian youngster Kenedy could come in for Marcos Alonso in the left wing-back position.

Cesc Fabregas has been ruled out with a hamstring problem so Danny Drinkwater could get a recall while I expect N’Golo Kante to be given the night off.

Conte may opt to play a more attack-minded formation with two attacking midfielders supporting the striker so Tiemoue Bakayoko may join Drinkwater in a midfield two.

New signing Ross Barkley isn’t eligible for selection as he wasn’t registered in time to feature in the FA Cup third round.

Attack: Conte has suggested he will give Eden Hazard the night off and if the Blues boss does go with two attackers then we should expect to see Pedro and Willian recalled tomorrow night.

Alvaro Morata’s woes in front of goal continued on Saturday but the Spaniard should be taken out of the firing line with Michy Batshuayi set for a recall up front against Norwich. 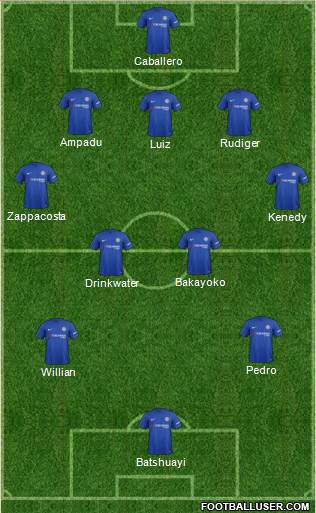