Manchester United take on Bournemouth at Dean Court on Wednesday night. Here is the team I think Jose Mourinho will pick for the game:

Manchester United will look to bounce back from their loss to West Brom when they take on Bournemouth at Dean Court on Wednesday night.

Goalkeeper: David De Gea is expected to retain his place between the sticks tomorrow night. Sergio Romero remains out with a knee injury.

Defence: Mourinho has vowed to freshen things up after losing at home to West Brom while he will also protect some players ahead of the FA Cup semi-final with Tottenham on Saturday.

Chris Smalling could be given a breather while Victor Lindelof is likely to make way with Eric Bailly in-line for a recall. Phil Jones is also available again after recovering from injury so he could make his first start for over two months.

Antonio Valencia could be retained at right-back but Marcos Rojo may get a chance at left-back with Ashley Young given a rest. Luke Shaw is another option for Mourinho but he seems to be out of favour.

Midfield: Mourinho has dropped a huge hint that he’s ready to axe Paul Pogba after his poor display against West Brom at the weekend that saw him hauled off after just 58 minutes.

Ander Herrera was also a disappointment so I think we may see the duo make way with Scott McTominay pushing for a recall alongside Nemanja Matic in the middle of the park.

Marouane Fellaini is also available again but the Belgian international may have to make-do with a place among the substitutes after recently recovering from a knee injury.

Attack: Mourinho has also suggested that January signing Alexis Sanchez is in danger of being dropped after putting-in another disappointing performance at the weekend.

Juan Mata is also expected to make way with Anthony Martial and Marcus Rashford both pushing for a recalls in attack against Bournemouth tomorrow night.

Jesse Lingard should be recalled with the England international playing in an attacking central midfield role behind Romelu Lukaku – who’s expected to one again lead the line up front. 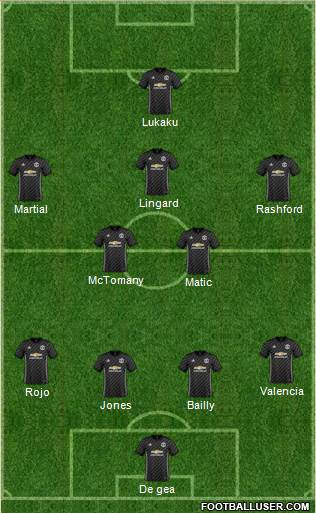