Liverpool take on Brighton at the Amex Stadium on Saturday afternoon. Here is the team we think Jurgen Klopp will select:

Liverpool will be looking to bounce back from consecutive defeats when they take on Brighton at the Amex Stadium on Saturday afternoon. Here is the team we think Jurgen Klopp will select:

Goalkeeper: Alisson was given a well-earned rest during the defeat to Wolves in the FA Cup on Monday night but I don’t think there can be any debate that he’ll be recalled this weekend so Simon Mignolet will make way.

Defence: Liverpool have serious issues at centre-back as Dejan Lovren joined the injury list after limping off against Wolves with a hamstring problem. It’s not thought to be too serious but the Croatian international will miss out on Saturday afternoon.

Joel Matip is still nursing a collarbone injury while Joe Gomez is working his way back to full fitness from a fractured leg but Virgil van Dijk is expected to return after missing the FA Cup defeat with illness. Fabinho played in defence against Wolves and although youngster Ki-Jana Hoever impressed off the bench, I think the Brazilian will keep his place in the middle of the back four.

Trent Alexander-Arnold is set for a recall after being rested on Monday night so Liverpool youngster Raphael Camacho will make way while Andrew Robertson will come in for Alberto Moreno at left-back.

Midfield: With Fabinho playing in defence, James Milner should keep his place in the middle of the park while Jordan Henderson is expected to recover from a minor knock to return in a three-man Liverpool midfield.

Georginio Wijnaldum was given a rest against Wolves so the Dutch international is almost certain to be recalled against Brighton with Naby Keita making way after a disappointing game on Monday but Adam Lallana could miss out due to a minor muscle injury that ruled him out of the FA Cup defeat.

Attack: Liverpool will recall their big-guns after Klopp named his key attackers on the bench at Molineux so Roberto Firmino should return to lead the line up front with Daniel Sturridge making way after a disappointing night on Monday.

Mohamed Salah and Sadio Mane were also summoned from the bench against Wolves as Liverpool searched for a late equaliser but the duo will return to the starting eleven against Brighton this weekend.

That means there may be no place for Xherdan Shaqiri in Klopp’s starting eleven but the Swiss international will be a useful weapon on the Liverpool bench alongside the likes of Divock Origi and Sturridge. 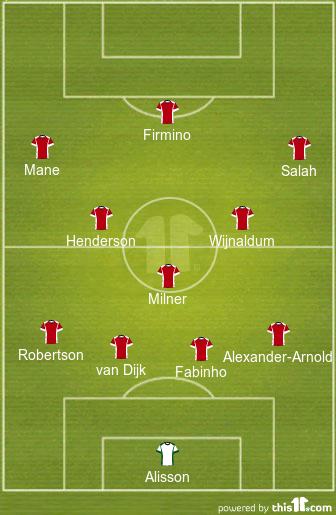