Chelsea take on Manchester City at the Etihad Stadium on Sunday afternoon. Here is the side I think Maurizio Sarri will select for the game:

Chelsea will look to climb back in to the top four with a positive result when they take on Manchester City at the Etihad Stadium on Sunday afternoon. Here is the side I think Maurizio Sarri will select for the game:

Goalkeeper: I don’t think there can be much debate over who’ll start in goal as Kepa Arrizabalaga will keep his place between the sticks with Willy Caballero having to make-do with a place on the bench once again.

Defence: However, we could see a change in defence as the Chelsea boss is expected to recall Antonio Rudiger to the starting eleven after he was named on the bench for the win over Huddersfield last weekend. Andreas Christisen is the man most likely to make way with David Luiz keeping his place.

Cesar Azpilicueta should once again start at right-back while Marcos Alonso is expected to keep his place at left-back despite his inconsistent form this season as Emerson Palmeiri is carrying a knock.

Midfield: After some poor performances in recent weeks, Chelsea were back to their best against Huddersfield after scoring five goals against the Terriers last time out but Sarri may still freshen things up against Man City.

Jorginho is certain to keep his place in the deep-lying playmaker position as he’s a key figure in Sarri’s system while N’Golo Kante is also expected to start. However, we may see Mateo Kovacic recalled with Ross Barkley making way.

Attack: Gonzalo Higuain got his career in England off the mark with two excellent goals last weekend so Chelsea will be looking to the Argentinean international to provide the goal threat at City tomorrow.

Eden Hazard was also among the goals with a brace last week and Sarri will be hoping his star man is on top form at the Etihad Stadium as Chelsea will need the Belgian superstar firing on all cylinders if they’re to get a result.

Willian got the nod against Huddersfield last time out but I wouldn’t be surprised to see Pedro recalled tomorrow. Callum Hudson-Odoi is expected to recover from illness but will have to make-do with a place on the bench where he’ll be joined by Olivier Giroud. 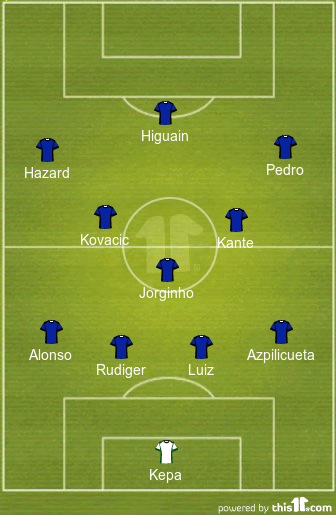