Managers are working hard trying to strengthen their squads during the summer transfer window so we’ll bring you all the latest news and gossip from around the globe. Here, Man Utd are still in the chase for Matthijs de Ligt…. 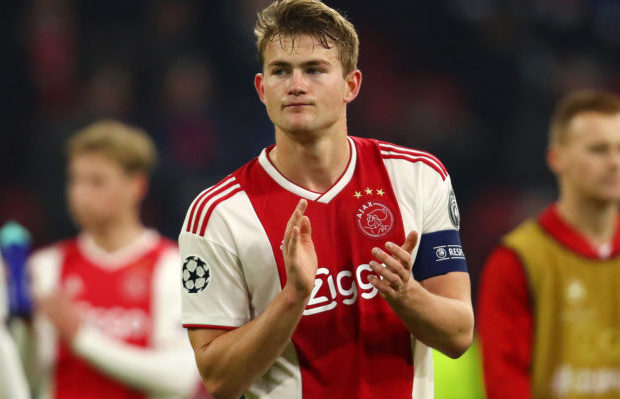 Manchester United have agreed to meet Ajax’s asking price for Matthijs de Ligt as the centre-backs proposed move to Juventus continues to stall, according to European football expert Julien Laurens via the Express.

De Ligt has emerged as one of the most in-demand players in world football since coming through the youth ranks a Ajax as the captained the Dutch giants to a domestic double last season and came within seconds of leading them to the Champions League final.

The 19-year-old is also now a regular with Holland and his sensational performances in defence alerted a number of top European clubs with Sport reporting last month that Manchester United, Paris Saint-Germain, Liverpool, Juventus and Barcelona had all tabled proposals.

It looked like United were set to miss out as Juventus emerged as the the clear front-runners and the Italians have been widely tipped to complete a big-money move for de Ligt ahead of the new season.

However, the Express claim Juve’s €55m plus €10m add ons offer has been rejected by Ajax as the Eredivisie champions are holding out for €75m [£67m], according to Spanish publication AS.

With the two clubs struggling to agree a fee, the door has opened for Man Utd as European football expert Julien Laurens claims the Red Devils and PSG have already agreed to meet Ajax’s asking price to sign de Ligt.

Laurens suggests that Ajax may end talks with Juventus and decide to sell de Ligt to United or PSG instead should the Serie A giants refuse to meet their demands soon.

“I think there’s a chance where Ajax will lose a little bit of patience and say ‘hang on a minute, PSG agreed, Manchester United agreed. In that case we stop talking to you and De Ligt can choose between the clubs that we actually have an agreement in place’,”

“It’s not really in Ajax’s interest to waste a bit more time about De Ligt. They want the money in, they want for him to go, he was great for them but now he’s decided that he wants to go.

“They want that deal to happen, they won’t want to have to go back and forth in negotiations with Juventus or whoever else.

“So they might well say ‘do you know what, we already have an agreement in place with some clubs, we’re going to only focus on them clubs and De Ligt would have to choose between those clubs because you’re wasting our time’.”

Juventus are seemingly trying to lower the asking price for de Ligt and their tactics could back-fire, and United are in prime position to take advantage if negotiations with Ajax collapse.

Ole Gunnar Solskjaer is desperate to strengthen his defence after United conceded 54 Premier League goals last season and de Ligt would be a superb signing if they could somehow manage to pull it off.