Defence: Chelsea could mix things up in defence with youngster Reece James pushing for a recall at right-back. That could see Cesar Azpilicueta switching to the opposite side of the back four with Emerson Palmeiri making way.

Fikayo Tomori is also hoping for a recall after missing out against Bournemouth last weekend but I think Lampard will stick with Kurt Zouma alongside Antonio Rudiger in the middle of the back four. Therefore, Andreas Christensen will also have to settle for a place on the bench.

Midfield: Chelsea are likely to make a change in midfield with Mateo Kovacic set to come back into the side. Jorginho is expected to keep his place in the deep-lying playmaker role while N’Golo Kante is almost certain to start yet again.

Therefore, Mason Mount may be the man to make way against Tottenham with the youngster dropping to the bench where he could be joined by Ross Barkley as he’s unlikely to start tomorrow.

Attack: Lampard seems to have settled on his preferred front three so I’m not sure we’ll see any changes in attack against Tottenham this weekend, despite Chelsea drawing a blank at home to Bournemouth last time out.

Tammy Abraham should continue to lead the line up front with Michy Batshuayi among the subs while Christian Pulisic and Willian are expected to keep their places on the wings. Callum Hudson-Odoi is an option if Lampard wants to freshen things up but I think he’ll have to settle for a place on the bench alongside Pedro. 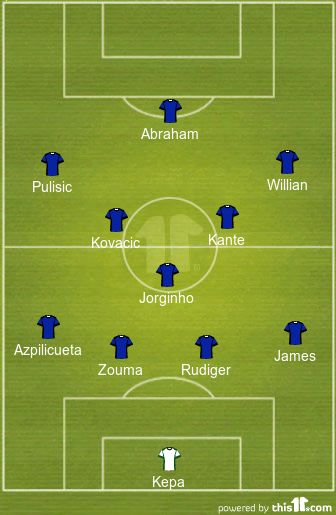