Arsenal welcome Olympiacos to the Emirates on Thursday in their Europa League last-32 tie. Here is the team Gooner Mac expects Mikel Arteta to select:

Arsenal welcome Olympiacos to the Emirates on Thursday night for the second leg of their Europa League last-32 tie. Here is the team Gooner Mac expects Mikel Arteta to select:

Goalkeeper: Arsenal No.1 Bernd Leno was selected for the first leg in Athens last week so Arteta is likely to stick with him between the sticks tomorrow meaning Emi Martinez will have to settle for a place on the bench.

Defence: Hector Bellerin made a successful return to action during the win over Everton on Sunday after missing the first leg with a minor muscle issue so the Spaniard is expected to keep his place at right-back tomorrow night.

Sokratis is pushing for a recall but I think Shkodran Mustafi may keep his place alongside David Luiz in the middle of the back four as the German has found a bit of form lately.

Sead Kolasinac is facing a spell on the sidelines after suffering a shoulder injury against Everton. Kieran Tierney is due to resume full training this week but he’s still not available for selection so Bukayo Saka will be recalled against Olympiacos. The 18-year-old has excelled in the position recently so he’ll get another chance to impress tomorrow.

Pablo Mari is in contention after building-up his fitness since arriving on loan from Flamengo in January but I don’t think we’ll see him in the squad against Olympiacos while Cedric Soares is still nursing a knee injury.

Midfield: Arsenal could make a change in midfield as Lucas Torreira is pushing for a recall after overcoming illness that prevented him from travelling for the first leg in Greece last Thursday night.

Dani Ceballos has put-in some encouraging performances recently but I think he might find himself on the bench alongside Matteo Guendouzi as Granit Xhaka is expected to keep his place in the middle of the park.

Mesut Ozil impressed against Everton on Sunday so I think he’ll keep his place against Olympiacos meaning Joe Willock will have to battle for a place on the bench having started in the first leg last week.

Attack: Alexandre Lacazette is expected to be recalled up front after being named on the bench against Everton so Eddie Nketiah is set to drop out despite scoring a vital equaliser at the weekend.

Reiss Nelson is an option if Arteta wants to freshen things up on the right wing but I think Nicolas Pepe will keep his place while Pierre-Emerick Aubameyang should once again start on the left following another excellent performance on Sunday. Gabriel Martinelli will therefore have to settle for a sub role. 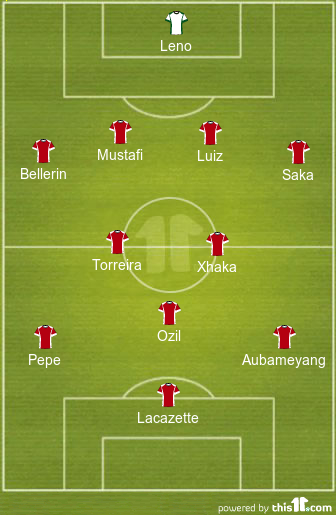