Goalkeeper: Kepa Arrizabalaga produced some excellent saves during Chelsea’s FA Cup win over Liverpool so the Spaniard may have played his way back into Lampard’s first team. Willy Caballero may therefore have to settle for a place on the bench tomorrow.

Defence: Chelsea are expected to deploy a back three/five against Everton so Cesar Azpilicueta could start on the right side of defence with Antonio Rudiger and Kurt Zouma keeping their places. Andreas Christensen remains a doubt due to a lack of match fitness so Fikayo Tomori could keep his place on the bench.

The switch in formation should see Reece James recalled in the right wing-back role after he was a substitute against Liverpool while Marcos Alonso is expected to keep his place on the left after impressing in recent weeks.

Midfield: Chelsea have major issues in midfield as their three first choice central midfielders are all set to miss the game against Everton with Jorginho suspended while N’Golo Kante remains on the sidelines with a groin injury.

Mateo Kovacic picked up an Achilles problem during the FA Cup game in midweek so Lampard will have little option other than to stick with Ross Barkley and he’ll be keen to impress against his former club.

Billy Gilmour is also set to keep his place after the 18-year-old put-in a superb performance against Liverpool on Tuesday night so Ruben Loftus-Cheek will remain on the bench.

Attack: Chelsea will be without Tammy Abraham as the striker is still nursing a niggling ankle issue so Olivier Giroud is expected to lead the line up front once again for the West Londoners this weekend with Michy Batshuayi among the subs.

Christian Pulisic and Callum Hudson-Odoi are still unavailable due to injury issues so Mason Mount should start in the Chelsea attack while Pedro may get the nod ahead of Willian. 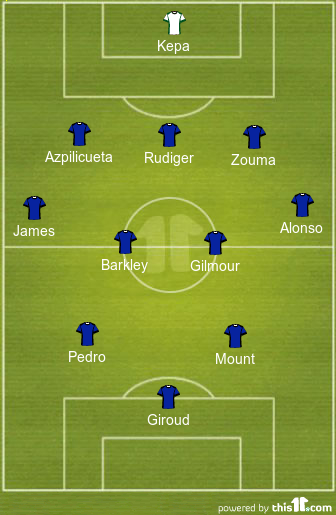