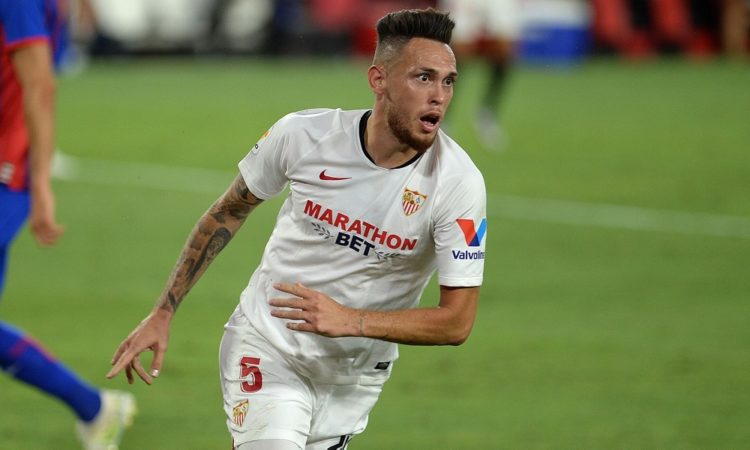 Manchester United are eyeing a late swoop to sign Sevilla attacker Lucas Ocampos if they fail to land either Jadon Sancho or Ousmane Dembele, according to ESPN.

Ole Gunnar Solskjaer is desperate to add another attacker to his squad before the transfer window shuts on Monday night but the club have been frustrated in their attempts to land number one target Sancho.

Dembele has emerged as United’s first choice back-up in-case a deal isn’t agreed with Dortmund and ESPN claims talks with Barcelona over a deal for the French international have progressed in recent days.

The report says Man Utd are trying to secure a simple loan deal but Barca want a permanent sale worth well over £45m so it looks like Solskjaer has identified another option to fall back on in-case a deal cannot be agreed.

ESPN says Manchester United are eyeing a late move for Ocampos and have already made enquiries about the Argentinean international’s possible availability during the closing days of the window.

The 26-year-old only joined Sevilla from Marseille last summer but, according to ESPN, the Europa League champions are willing to cash-in on the South American forward if United put £36m [€40m] on the table.

Ocampos enjoyed an excellent debut campaign in Spain as he contributed 17 goals and 5 assists in his 44 appearances to help Sevilla win the Europa League and finish fourth in the La Liga table last season.

However, it appears Sevilla are prepared to turn a quick profit this summer and Ocampos would be a terrific addition to Solskjaer’s squad as he’s developed into a top class attacker over the past few years.

He’s predominantly a right winger but is also comfortable playing from the left so he’d give United a versatile option in the final third to support the likes of Marcus Rashford, Anthony Martial and Mason Greenwood.

We’ll have to wait and see how things develop over the weekend but time is running out for Man Utd to get a deal in place for Sancho or Dembele so we could see them make a late swoop for Ocampos before Monday’s deadline.