Arsenal take on Olympiacos in the second leg of their Europa League tie on Thursday. Here is the team Gooner Mac expects Mikel Arteta to select:

Arsenal take on Olympiacos in the second leg of their Europa League tie on Thursday evening. Here is the team Gooner Mac expects Mikel Arteta to select:

Goalkeeper: There will be no change in goal as Bernd Leno is expected to once again start between the sticks for Arsenal so Mat Ryan will remain on the bench.

Defence: Arteta insists the tie isn’t over despite the fact Arsenal won the away leg 3-1 last week so the boss is set to field a strong side tomorrow night. David Luiz has been playing very well lately so he should keep his place alongside Gabriel – who put in another impressive display against Tottenham at the weekend. Pablo Mari and Rob Holding will be options from the bench.

The boss might be tempted to give Kieran Tierney a rest but this is still a huge game so the Scotsman could start against Olympiacos and get a breather at the weekend. However, we should see a change at right-back with Hector Bellerin coming in for Cedric Soares.

Midfield: Thomas Partey has been substituted midway through the second half during our last two matches and he doesn’t look 100% yet so I wouldn’t be surprised to see him given a rest against Olympiacos.

Mohamed Elneny is pushing for a recall after scoring an excellent goal in the first leg but I think it will be Dani Ceballos who partners Granit Xhaka in midfield if Partey does drop out.

Martin Odegaard continued his fine form with another impressive performance against Tottenham at the weekend and he’s quickly becoming an important player for Arsenal. However, he’s played a lot of football lately so Arteta may decide to give him a rest tomorrow with Emile Smith Rowe moving into a more central role.

Attack: Bukayo Saka was forced off with a thigh injury against Tottenham and while Arteta confirmed today that it’s not a serious issue, I don’t think Saka will be risked from the start against Olympiacos. Nicolas Pepe could therefore be recalled to start with Willian also pushing for a recall to the Arsenal attack.

Pierre-Emerick Aubameyang was axed for our win over Tottenham after arriving late for the pre-match team meeting, however, the Gabon hitman is expected to be recalled tomorrow with Alexandre Lacazette making way.

Gabriel Martinelli wasn’t even included in the matchday squad on Sunday but Arteta insists there is no underlying issue so the youngster might return to the bench against Olympiacos. 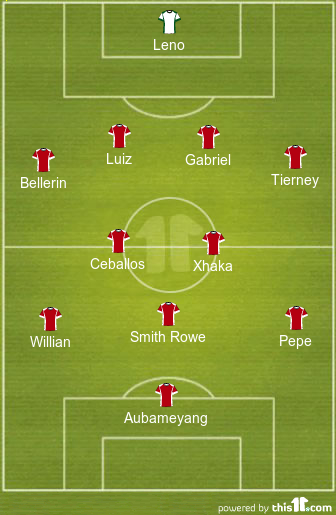