Chelsea take on Aston Villa at Villa Park on the final day of the Premier League season. Here is the team we expect Thomas Tuchel to select:

Chelsea need a win to guarantee a top four place when they take on Aston Villa at Villa Park on the final day of the Premier League season. Here is the team we expect Thomas Tuchel to select for the game:

Goalkeeper: Edouard Mendy will keep goal once again for Chelsea tomorrow afternoon so Kepa Arrizabalaga will have to settle for a place on the bench.

Defence: Andreas Christensen is back in contention after recovering from a thigh injury and he may be given some much-needed game time to get him up to speed ahead of the Champions League final.

Antonio Rudiger is expected to keep his place while Cesar Azpilicueta may drop into the back three following his stint out wide. Thiago Silva could be given a rest while Kurt Zouma may have to settle for a place among the Chelsea substitutes against Villa.

Midfield: If Azpilicueta drops into defence then we should see Reece James back in his usual wider role having been deployed in a back three to help nullify the threat of Jamie Vardy during Chelsea’s win over Leicester last week.

Ben Chilwell is expected to keep his place on the left flank ahead of Marcos Alonso while Jorginho should also start once again for the Blues in the middle of the park.

However, N’Golo Kante is a doubt after being forced off with a thigh issue against Leicester last time out so Mateo Kovacic could be recalled to partner Jorginho in midfield tomorrow.

Attack: Chelsea are expected to freshen things up in attack with Mason Mount the only player almost guaranteed his place in the starting eleven as he’s been a vital part of Tuchel’s side this season.

Kai Havertz is back in training and could be given a start after recovering from a minor knock which means Timo Werner may drop to the bench at Villa Park.

Hakim Ziyech is also pushing for a recall so Christian Pulisic may have to settle for a place among the Chelsea subs tomorrow afternoon. Tammy Abraham, Olivier Giroud and Callum Hudson-Odoi will be other options from the bench. 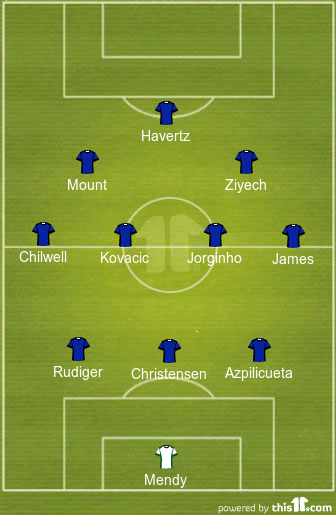