Arsenal Ready To Pounce As £20m Reina Wants Out Of Liverpool 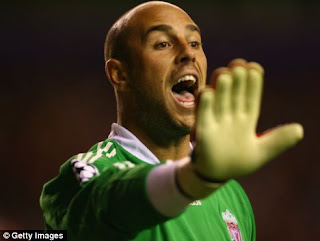 Pepe Reina has further fuelled the fire about speculation that he will quit Anfield in the Summer. The Spanish shot-stopper has frequently been linked with a move away from Liverpool this season and he is quoted in todays press as saying:

“We have to strengthen,” Reina told the Daily Star. “If we want to improve then we have to do that.

“It is our duty to be strong, to get better.

“The only thing I can do is train and do my best. Who knows if I have got years left?

“It’s not about being patient. It’s about the club winning and I want to be competitive.

“We used to fight to be among the top team and be in the Champions League.

“Sadly that’s not the case now. I want to win titles.”

It appears that the keeper, good as he has been for Liverpool, is actively seeking a move away from Anfield following the departure of compatriots manager Rafa Benitez and players Fernando Torres and Xabi Alonso in the past two seasons.

It is believed that our keeper has a £20 million buyout clause in his six-year contract and that Arsene Wenger is willing to meet that price following the poor displays by Almunia and co.

Maybe Liverpool should go for out-of-favour Shay Given of Man City? The Irish International who is very talented and experienced and would be an ideal replacement should Reina decide to leave in the summer.