Wishere and Ramsey: The Future Of Arsenal 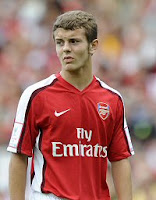 After watching the England vs Wales match there is no doubt that both Wilshere and Ramsey will be great for Arsenal in the near future. While the match was a bore especially in the first half where England just steam-rolled their way past a very listless and nervous Welsh side. It was not any better in the second half but at least Wales did try to make a match out of it.

I only watched the match because I wanted to see how Wilshere and Ramsey performed basically against each other. Of course, Jack was brilliant and his potetial is practically boundless. I am sure from this match forward he will be a first team regular in Capello’s side.

It is amazing how he has just seamless moved into the English first team this season. I think Capello will have a hard time to decide if he is going to drop Lampard or Gerrard in the next match because there is no dislodging young Jack. 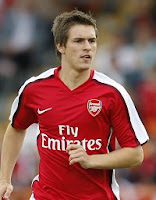 As for Ramsey, I still think he is not back to his full potential yet, although he played quite well in the second half. You could see that he tried to do his best to galvanise the squad but there were glimpses of rustiness in his play. His first touch was poor at times and he faded towards the end of the match as his stamina gave way.

As I see it, both Wilshere and Ramsey will carry Arsenal’s fortunes moving forward. Forget about the Diaby’s and Denilson’s, we have two British players who are miles ahead of the rest. When Frimpong comes back, I am sure we will have a midfield trio that will dominated the Premiership midfield battles for years to come. Don’t forget, Jack and Frimpong are only 19 and Ramsey only 20.

In the midst of all the gloom and doom of Arsenal’s form going into the international break, let’s share in the dream of this exciting trio conquering everything that is in front of them.