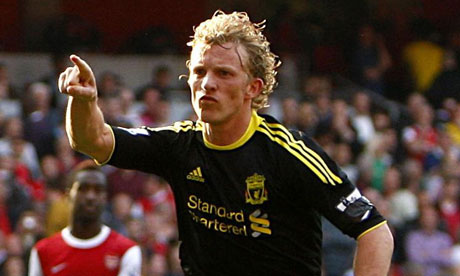 I am posting here on behalf of Liverpool fans all around, and I have to say that it was a display to be proud of for the men in red.

With a team where it was practically the walking wounded, the first team regulars such as Gerrard, Aurelio, Johnson, Kelly, Agger and even Carragher in the match, the Liverpool FC put on a very spirited display at the Emirates.

Step in John Flanagan and Jack Robinson, aged 18 and 17 respectively, with Flanagan playing his second match in the week (debut last Wednesday) and Robinson also a relative newcomer. Robinson even had the daunting task of taking on speedy winger, Theo Walcott, a task too dificult for starter, Fabio Aurelio, who pulled his hamstring in the first half.

Both stood in phenomenally in front of the unblinking eyes of the Emirates and made wonderful accounts of themselves at their full back positions. Jay Spearing was another standout, another graduate of the academy, he was named the man-of-the match despite giving away a penalty in the match. But his tracking back and his interceptions stopped Arsenal from running rout on Liverpool.

But what must be most commendable must be what was seen in the final few minutes at the Emirates, and the Arsenal fans must still be shaking their heads in disbelief, 8th minute, stoppage time, penalty for Arsenal, converted, the crowd goes crazy, Van Persie goes ballistic (and earns a booking), and moments later, Shelvey makes some magic outside the box, and a challenge goes in right on the edge of the box, step up Suarez.

The drilled free kick straight into the wall. 10th minute stoppage time, surely game over, no? But Lucas chases after the ball, and after a rather rash challenge by Eboue, Liverpool have a penalty. Dirk Kuyt, well what can I say, if that wasn’t nerve wrecking, you must be crazy. A huge hiss of booes on Arsenal’s part and then it all seems to stop for a moment. It was the most incredible ending, the two Dutchmen scoring.

So tell me what you guys think of the game in the comments section below!