As you may now, yesterday, Borussia Dortmund were crowned Bundesliga champions for the seventh time in their history after defeating Nurnberg 2-0. Dortmund fully deserved the title, with a string of impressive performances and what impressed the most w…

As you may now, yesterday, Borussia Dortmund were crowned Bundesliga champions for the seventh time in their history after defeating Nurnberg 2-0.

Dortmund fully deserved the title, with a string of impressive performances and what impressed the most was the maturity and mentality of such a young squad and how consistent they were throughout the season, despite their youthfulness. One player in particular that I was impressed with, is a player by the name of Nuri Sahin.

Nuri Sahin is a German-born Turkish international, who is in my opinion, the best player this season in the Bundesliga. Nuri Sahin is a midfielder who plays as a playmaker and who has incredible vision, great skill with a great passing range and technique. Nuri Sahin said before the season begun, that he will be better than Bastian Schwignsteiger, who was up until this season, the best midfielder in Germany and one of the best in the world. Nuri Sahin was laughed at, but he has certainly stood by his word, and lightened up the Bundesliga with incredible performances and he is one of the main reasons for Dortmund’s successful campaign.

Sahin has made 30 appearances so far, garnering 6 goals and 8 assists. His performances have not gone unnoticed, as many clubs are hovering around for him from the likes of Manchester United, Barcelona, Bayern Munich, Real Madrid, and of course the Gunners. Nuri Sahin reminds me so much of current Arsenal skipper and talisman, Cesc Fabregas, in terms of their playing style. If and only if, Fabregas leaves this summer, then I suggest that Wenger should take a look at Sahin. Not only because he’s similar to Fabregas in terms of playing style and age, but because he has a buyout clause of 6 million pounds, which means that he’s a bargain signing and an absolute steal.

With his talent and low value, Sahin will have plenty of suitors and especially as he reportedly refused to sign a new contract. I would love to see Sahin in an Arsenal shirt, but that’s only if Fabregas leaves. But if you ask me who would I choose between the two, I would pick Cesc Fabregas in a heartbeat. 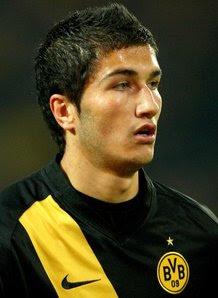 What do you think fellow Gooners? Do you want to see Sahin in an Arsenal shirt next season? Is he a suitable replacement to Fabregas IF he leaves? If not, who do you suggest?

Cheers and take care everyone,