[PLAYERS RATINGS] Manchester United 2 Chelsea 1: How The Reds Got On…. 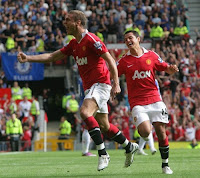 Knowing that they had a massive task at hand, Manchester United rose to the occasion to knock off Chelsea 2-1 at Old Trafford to give them an almost insurmountable advantage in the Barclays Premier League title race.

Javier Hernandez and Nemanja Vidic scored two first half goals, but a Frank Lampard goal midway through the second gave the Blues hope, however, the Reds admirably clung on for the fully-merited victory that could see them claim the Premier League trophy back.

Chicharito and the Reds skipper scored the two precious goals, but was it enough for them to earn Man of the Match honors for United?

Made a couple of commanding saves, but van der Sar was left stranded and could not do anything about Lampard’s goal.

Given the nod ahead of his brother, Fabio showed energy throughout, but a stamp on his foot by Ashley Cole forced him to be replaced near the end.

Was not troubled for much of the afternoon by Chelsea, but Rio’s best contribution was when he told Evans to get up and play on, which showed that he is still a major leader at United.

Reacted quickest to get the second goal, but Vidic was immense at the back handling everything and anything that the Blues threw towards him.

Forced off at halftime because of an injury, O’Shea’s interception and cushioned header ultimately led to the Reds scoring the opening goal.

An absolute mass for full-backs to deal with, Valencia pinned Cole back and prevented him from being consistently involved in the Chelsea attack.

A seismic display by Carrick protecting the back-four and initiating a very dominating counterattack.

Not really known for his combative nature, Giggs put in a very governing performance, which was coupled with his finesse and composure.

A pristine pass to set up Chicharito for the opening goal, Park was domineering in the midfield throughout nipping the ball away from everyone.

On any other day, Rooney would have scored at least two goals, but other than his lack of goals, he played his favored role to perfection.

A stunning opening goal that oozed with composure and confidence, Hernandez was a thorn in the Chelsea center-back’s side all game long.

Came on for O’Shea at halftime, Evans put in a very dominant performance with some great clearances and skill on the ball.

Late sub for Fabio, Smalling’s only contribution was to make one dashing run forward, and with Flourent Malouda pinched way too far in, he had an easy time.

With the destination of the Barclays Premier League trophy on the line, it was wonderful to see that every Manchester United player that completed the 90 minutes had a fair shout at being the Man of the Match, which will definitely best please Sir Alex Ferguson.