Carrick Has Claimed Center Stage In The Reds’ Midfield 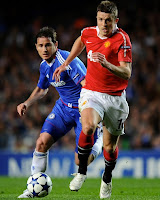 Ahead of Manchester United’s crucial match with Chelsea, The Sun’s Terry Venables stated that the game would be determined by the winner of the midfield duel between Michael Carrick and Chelsea’s Frank Lampard.

Although Lampard ended up scoring a consolation goal, he, as well as the other Blues’ midfielders, were virtual non-factors throughout against the Reds, and that was in large part to Carrick not putting a wrong foot forward all game long.

Venables, a former first team player Stamford Bridge, said that for United to win, Carrick had to turn in a prominent performance keeping tabs on his midfield counterpart – and he did just that.

A lot of United supporters have constantly belittled Carrick’s impact Old Trafford, but, without him, the Reds are not the same team defensively. What is most shocking is how an attack-minded player has been able to revert into the holding midfield role so quickly.

Against Chelsea, he completed 42 of his 50 passes that he attempted, but Carrick’s best pass should have led to Wayne Rooney put the Reds further in front. In the 58th minute, Carrick was being hounded by Lampard and Ramires, but he was still able to precisely bend his pass with the outside of his boot sprung Rooney free, but, unfortunately, the United center forward missed the mark.

The United No. 16 was always going to have a tall order filling the boots of the shirt’s predecessor, because of his tenacious style, but Carrick has been very successful since coming to Old Trafford in 2006.

In his five seasons at United, Carrick could be on his way to win his fifth Premier League title winners’ medal – which some fail to think that he has played a huge role. With the help of his teammates, Carrick has amassed nine trophies – and potentially a further two this season – which is only six off Roy Keane’s total in half as many seasons at the club.

Even though some want to, this is not about comparing Carrick to Keane, or any other center midfielder that has ever played at United, because each one of them served a purpose and knew their role that Sir Alex Ferguson bestowed upon them.

However, there seems to be a wonderful newly-forming, one-two partnership involving Carrick and Ryan Giggs in the center of the midfield. The way the two of them have expertly combined in the last three matches against Chelsea are something that very few could dream of. It is almost reminiscent of the understanding that Giggs and John O’Shea formed at the end of the 2004/05 season – right before Carrick joined up – and they made a late run at that season’s title.

The engine room, as many refer to it, is where games are normally won and lost, Carrick has been the focal point of United’s success getting to the UEFA Champions League Final, and to be within touching distance of the Premier League title with two games to go.

Even though Carrick made an ill-fated mistake that prevented the Reds from going for the treble, it is almost certain that he will be one of the first ones on the United team sheet to face Barcelona. The last time these two teams played, Carrick, and his teammates, were completely outfoxed by the Catalans in the 2009 final, so they are looking to make amends for that setback.

Michael Carrick was fantastic against Chelsea, and, maybe now, some of the Manchester United supporters will appreciate all that he brings to the club and respect him as a player.