Arsenal, Manchester City and Tottenham are all fighting for the signature of Lille’s Ivorian forward, Gervinho. Arsenal are reported to be in “pole position” to sign him, and the 23 year-old, whose contract expires in 12 months time, will apparently go… 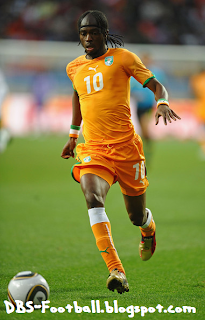 Arsenal, Manchester City and Tottenham are all fighting for the signature of Lille’s Ivorian forward, Gervinho. Arsenal are reported to be in “pole position” to sign him, and the 23 year-old, whose contract expires in 12 months time, will apparently go for around £6 million.

He has been targeted by a number of Premier League clubs including Newcastle and Everton, while Harry Redknapp of Tottenham had been rumoured to have been to watch him in action for Lille. Gervinho has helped his French side to being just 1 point away from clinching the League title, scoring 14 goals and assisting 9 during the season.

Gervinho himself seems comfortable about the concept of moving to the Premier League, speaking about the various Ivorian players that he knows in England:

“I like that league. I have many friends who play there: [Cheik] Tiote, [Salomon] Kalou, [Abdoulaye] Meite, [Didier] Drogba.

“But you never know what will happen. We could make the decision to go and then end up staying, or the other way around. You can never say where you will go because everything could change.

“At the end of the season we can sit down and talk. If we [Lille] decide to carry on this adventure together, that will be fine with me. If not, we turn the page and I would hope to leave the club with happy memories and having won one or two trophies.”

If he leaves this summer, it looks as if he will leave with those “happy memories” he speaks of, as not only are they just a point away from the title, but he has already won the Coupe de France, which is the French equivalent to the English FA Cup.

He will however have to decide who he will join as he sits down with representatives to chose his desired club at the end of the season. Arsenal have also been strongly linked to another Lille player, Eden Hazard, who has expressed his interest in joining Arsenal in the future too. The question is, would Lille be prepared to let two of their brightest and best players leave for the same club? Arsenal will be hoping so.