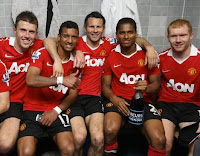 In the third installment of a four-part series, The United Religion rates how each of Manchester United midfielders’s contributed to the success of the club during the 2010/11 season.

Throughout the entire season, a tremendous amount of criticism was shelled at the players in the United engine room, but let’s see how each midfielder rated.

Ended the 2010/11 with the best statistical month of his United career with three goals and two assists from his three games in May. Even though that was his best month, his best game came in the Reds’ 7-1 demolition of Blackburn back in November. Altogether, Anderson made 30 appearances for United and scored four goals in the process – three more than his previous three seasons combined.

The one player that receives more than his fair share of criticism for not being the robust, box-to-box midfielder that the Old Trafford faithful is accustom to, but Michael had a decent season. Even though it was his first season that he did not score a goal, Carrick was not in this side to do that, because Ferguson converted him into a quarterback, holding midfielder. His 43 appearances were tied for the least amount of times he has featured for United, but he was on every team sheet in every big game that the club had.

Failed to reach the heights of the previous two seasons, Darren had to exert all of a fair share of his energy trying to fight off a virus that kept him out of the last part of the season. With that said, Fletch still managed to make 37 appearances for United, which was third most amongst the Reds’ midfielders.

Like Carrick, Darron gets a lot of criticism that he is not United quality, but for the second year in a row, he scored a vital goal at Old Trafford in the Champions League knockout stages. Gibson is approaching his prime years, and 20 appearances a season is not something a player should aspire to. Gibbo is certainly a loyal servant to the club, because he has been able to leave on a few occasions, especially with his national team manager chiming in, but he still remains a valuable squad player in Sir Alex’ eyes.

Turned 37-years old this year, and Ryan has not shown any signs of slowing down as he total 38 appearances. Being rested at the right times by Sir Alex Ferguson, the Welshman provided some key assists and a goal late in the season, which underlines his ability to still dictate results at his tender age. Giggs is the only player to have scored and played in every season of the Barclays Premier League since it originate in 1992/93 season – a 19 years running. Impressively, Giggs still has the energy to prolong his United career at least another season, which will increase his club-leading appearance total of 876.

After struggling to make a name for himself at Old Trafford, Nani had a breakout season for United as he registered a Premier League-high 18 assists during his personal-best 48 matches for the club. Nani used his trickery and ability to beat his marker with both feet to not only create a chance for his teammates, but to also total his best goal total, 10, in a Red shirt. However, a disgusting challenge by Jamie Carragher saw Nani lose that killer edge, but he was still honored with Players’ Player of the Year award, which is the ultimate honor that he could receive.

Suffered an unfortunate ankle injury during the pre-season, which kept Gabriel on the sidelines to start the season. However, even when he had the chance to make something of this season, Obertan failed to put in a performance to demand a first team shot, which saw him only make 15 appearances including just two after January 1.

There might not be a better player in a big game that does not have the name as Ji-Sung. The South Korean has earned the nickname, “Three Lung” for many reasons and he showed that with some vital goals and displays at different times of the season. Park missed a big chunk of the season through international duty and injury, but he still amassed 27 appearances in 2010/11 and scored eight goals – his best total since joining the club six years ago.

Paul’s season started off with a bang with him winning August’s Barclays Premier League Player of the Month after some fine performances.Injuries and form limited him to just 32 appearances, which was the third lowest of his fourth career at Old Trafford. One disappointing aspect of Scholesy’s was that he only registered one goal – a trademark long range thunderbolt – that took him to 150 goals in his United career. After the season, Scholes, who is a very proud, but humble professional, saw his numbers dipping, so he called it a day on his unparalleled career.

Suffered a horrific leg break against Rangers early in the season, but Antonio came back from that just as strong, which was symbolic of his attitude. After coming back from the injury, the mild mannered traditional winger allowed his football do his talking and was a constant fixture in the side. He became the first Ecuadorian to feature in a UEFA Champions League final, but, altogether, Antonio featured 19 times for United and scored three goals in all competitions.