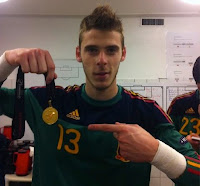 Now that that the Under-21 European Championships are finally over, David De Gea can finally end the hysteria and sign for Manchester United – or not.

The young goalkeeper did absolutely no harm to his growing reputation by playing an instrumental role in Spain’s capture of the U-21 crown, but he either needs to commit to United long term or Sir Alex Ferguson needs to look elsewhere.

Even though De Gea has spoken admirably about two of the greatest-ever goalkeepers that United have had, he has not mentioned a word of desire to follow in their footsteps and play at Old Trafford, which is concerning to say the least.

Sir Alex, who missed a game to fly to Spain to watch him in action, affirmed that Atletico Madrid shot stopper is his preferred long-term replacement for Edwin van der Sar, but there has not been any reciprocal feelings from him. De Gea said that he grew up idolizing both van der Sar and Peter Schmeichel, but that has been all that has reached the press in terms of potentially linking him to the club.

While it is respectable for him to minimize distractions as he wanted to wait to discuss his future plans until after the tournament, it could make one think that he does not think all that much of joining the biggest club in the world. However, it is more than likely down to him wanting to properly pay homage to Atletico, which is the only club he has ever known.

One thing that a lot of supporters are going on about with De Gea is his age and how he will be at United for the next 10 years – or more. Believe it or not, De Gea is only 20 years old and with every foreign player a manager runs the chance of them being a flight candidate.

If Iker Casillas calls it a day or Victor Valdes leaves Barcelona, will De Gea force his way out of the club to play for one of the top clubs in his homeland? It’s not a fault of his, because that is who he might have grown up watching and supporting, so obviously it would be a lifelong dream of his to fulfil. However, it is something that all need to be cognizant of, because it has happened to United before – enter Cristiano Ronaldo.

Hopefully this transfer tale comes to an end sooner rather than later, because the pre-season is nearly upon Manchester United, and David De Gea has a huge task of adjusting to life at the club in just two months’ time.