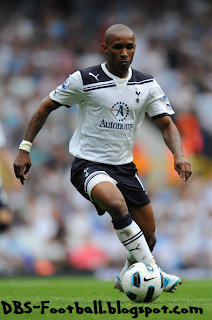 Arsenal have been linked to a whole host of top strikers in the past few weeks, and some names churned up have been more popular than others. Jermain Defoe is a player who strongly divides opinions with Arsenal fans, as some see him as injury prone, up and down, inconsistent form, not a regular goalscorer – and worst of all he plays for Arsenal’s arch rivals Tottenham. Others, like Ray Parlour, believe Defoe would be a decent signing for Wenger, who could chip in a good few goals for Arsenal when he is in good form, and pose a real threat up front, with some clinical finishing.

Ray Parlour, the former Arsenal midfielder explained why he thinks Defoe would be a good signing and clever addition to the Arsenal side, despite his Tottenham connection. Essentially, what Parlour says is that Arsenal need a new dimension in their game that will help them to win a trophy. He believes it is a clinical finisher, who Arsene Wenger could rely on to come off the bench when needed to score a goal and win a game. He said:

“They do need a striker. Marouane Chamakh found it difficult (last season). He did well in the early parts of the season but went off the boil a bit.”

“They should get someone who’s a little bit different, who can score a goal, like an Ian Wright. Jermain Defoe would be a good signing for me. Tottenham fans won’t like it but that’s how it goes these days. I was there when Sol Campbell signed and he was a great player for Arsenal.”

“What he (Wenger) was trying to say is that when his best side is out, they’ve got a chance. The problem he’s got is in-depth.”

“When his major players get injured, there is not enough quality behind who can come in and do a job. When I was playing, when vital players got injured like Dennis Bergkamp, we still had players who could come in and do a good job. That’s the difference now.”

“If Arsenal get their top side out they are a very good side, there’s no doubting that. But if a couple of them get injured, have they got enough back-up? Players like Bendtner and Denilson, can they come in and do a sound job? Last season they had their chances but I don’t think they did.”

Defoe is 28 years-old and isn’t the tallest of strikers. His injuries restricted his success last season, meaning he only scored 9 goals in 30 games. Perhaps if Arsenal were to have brought him in on the back of a successful season in terms of goalscoring, the fans would be a bit more pleased and confident, but as it is, when Arsenal are linked to prolific goalscorers from last season such as Radamel Falcao and even Peter Odemwingie, Defoe doesn’t seem much of a step up.