Following Wayne Rooney’s double on Tuesday night, the Manchester united striker kissed the badge on his shirt, resulting in several fans being outraged and calling his actions disgusting…. 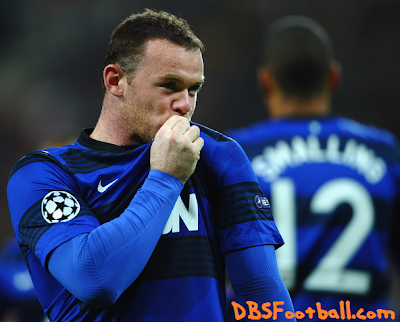 Manchester United’s patience paid off on Tuesday night in a frustrating game against the Romanian side, Otelul Galati. Two precise Wayne Rooney penalties saw United take three valuable Champions League points back to Old Trafford ahead of their crucial Premier League derby game with City, who were also close victors in their European game against Villarreal.

However, many Manchester United fans were apparently outraged, or perhaps humoured by Rooney’s celebration to his penalty goals, with some ‘fans’ calling his actions “Disgusting”. After opening the scoring, the England striker pinched the left breast of his United shirt, lifted the club crest up to his pursed lips and planted a kiss onto the perfectly stitched badge that fans adore.

The dictionary defines a kiss as; “to touch or press with the lips slightly pursed, and then often to part them and to emit a smacking sound, in an expression of affection, love, greeting and/or reverence.” What’s the problem then? Well apparently, Wayne Rooney should not deceive the fans suggesting he loves the club, and by conning them into thinking that he is at the club for any other reason than to pick up a pay packet for scoring goals.

He doesn’t have “the right,” supposedly. Now, I can understand fans frustration and anger at a player like Rooney, who decided he wanted to leave the club previously because they “lacked ambition,” only for him to change his mind when he received a pay rise. It doesn’t look good. In fact it looks pretty awful from a loyalists perspective.

However, it is naive to think that modern footballers are supporters of the football club to the extent that football fans are. Footballers come from all over the world and play for rival City’s; Rooney’s childhood in Liverpool is a prime example. But they are doing their jobs, and getting paid handsomely for it. If they have delivered what the loyal fans pray for; in Rooney’s case, a goal, then let him kiss the badge just as passionately as when he kisses a trophy that he wins with the club.

Of course fans can question Rooney’s motives behind a kiss, but it was simply symbolic of the affection and passion that the young striker has for both the club, which has made his career as a world star, and for the football fans who continue to cheer his name. He now has 11 goals in 10 appearances this season, as well as two assists, and a presence which benefits the team around him. Let him kiss the badge, let him win us games, and let the fans support him.