Arsenal striker Robin van Persie shows his frustration at Arsenal, as the Gunners go close to scoring against Man City in the Carling Cup. 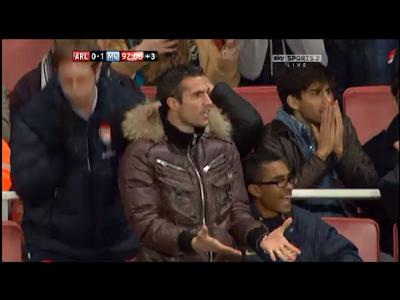 Robin van Persie may not have been in the Arsenal squad for the Carling Cup quarter final game against Manchester City on Tuesday night, but he was as passionate and supportive as ever from the sidelines as he watched the Gunners narrowly lose to a Sergio Aguero goal at the Emirates.

As a late cross was whipped into the City area, Arsenal’s answer to the Robin van Persie shaped hole in the attack – Marouane Chamakh, attempted to get his head on the end of it, but simply wasn’t quick enough to finish the chance to equalize in injury time. Van Persie leapt to his feet, gesticulating furiously like many Arsenal fans in the stadium will have done, with Arsenal’s chances of progressing through to the semi finals of the Cup – and possibly the clubs chances of winning any silverware this season – quickly diminishing in front of their eyes.

Wenger left his leading goalscorer out because he described him as “on the edge” and running close to empty having played three games in just 7 days.